If that decision was not made, military actions would start. Pashinyan on withdrawal in Syunik | ARMENPRESS Armenian News Agency

If that decision was not made, military actions would start. Pashinyan on withdrawal in Syunik 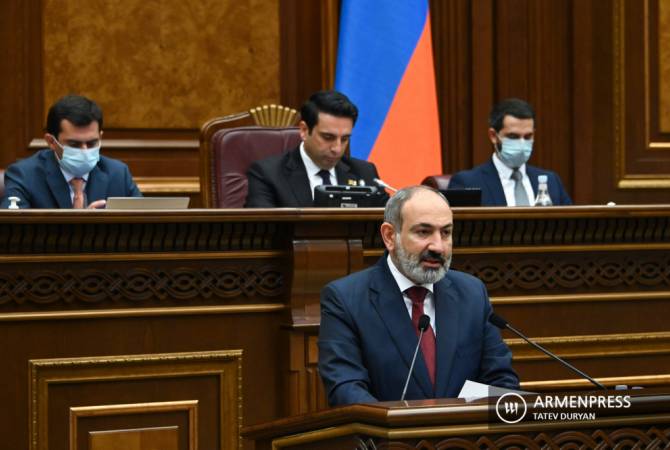 
YEREVAN, 27 OCTOBER, ARMENPRESS. Prime Minister of Armenia Nikol Pashinyan says that the command of withdrawal of troops in Syunik was given by him in order to avoid military actions, with the intention of not losing the strategic road at least for some time, ARMENPRESS reports Pashinyan said during the parliament-Cabinet Q&A session referring to the question of MP from ''Armenia'' faction Anna Grigoryan.

Grigoryan mentioned that Azerbaijani border guards appeared in Syunik, because on Dectember 18 there was a command of withdrawal of troops, which was not envisaged by the November 9 declaration. ‘'Was the command of withdrawal of troops oral or written? What is the first and last name of the person who made such command, was a Security Council meeting held before making such decision?'' asked the member of parliament.

“With regards to Syunik, have I ever refused that I am the responsible person for that decision? Wheather the command was oral or written, they are made according to procedures. Was there a discussion? Yes, there was, session of the Security Council was not held, but all members of the Security Council, Governor of Syunik participated. The Minister of Foreign Affairs said they were not aware, but the Deputy Minister also participated in the discussion, the discussion took place at the Government. And the decision was made in order to avoid war'', Pashinyan said.

According to him “If the decision was not made, military operations would start there. And in Syunik we would really have problems. We were standing dozens of kilometers ahead, unfortunately we reached here'', the Prime Minister said.

He mentioned that the decision was made with the logic that during the negotiations there was a perception that 7 regions are to be handed over. ''Those territories were handed over because of being part of the 7 regions. Why are they part of the 7 regions? Even if you don’t like it, it is registered by the Law on Administrative Territorial Division, it is not something new”, Pashinyan said and assured they have no secrets.

According to the Prime Minister, the decision was made with the intention of not losing the strategic road at least for some time. He said that the command of withdrawal of troops was given by him, implemented by former minister of defense Vagharshak Harutyunyan.