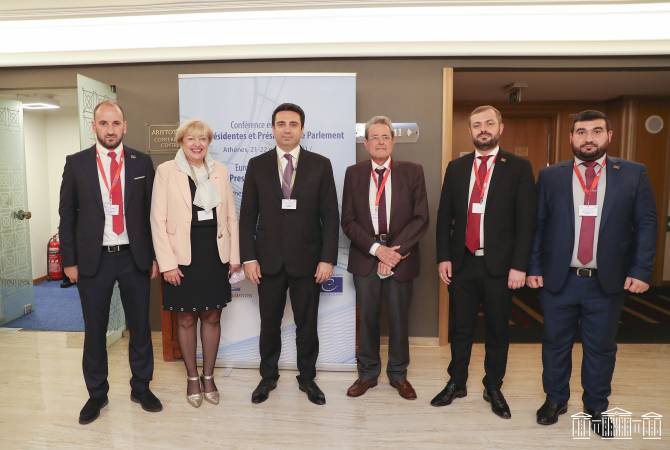 
YEREVAN, 21 OCTOBER, ARMENPRESS. The President of the National Assembly of Armenia Alen Simonyan met with the Deputy Speaker of the Senate of the French Republic Pascale Gruny on October 21.

As ARMENPRESS was informed from the press service of the National Assembly, Alen Simonyan mentioned that the meetings with the French partners are always unique for their friendly and warm atmosphere. According to the President of the National Assembly, the support of France and its people to Armenia and Armenian people first in the fight against the coronavirus, then during the catastrophic war is a testament of sincere friendship. In this context, the adoption of resolutions condemning the Azerbaijani-Turkish aggression against Artsakh and on the necessity of recognition of the Republic of Nagorno Karabakh by the two chambers of the parliament was emphasized. The President of the National Assembly of Armenia noted that Armenia always highly appreciates the serious role of France as a Co-chair of the OSCE Minsk Group in the only internationally recognised format of the resolution of the Nagorno Karabakh conflict.

The parties referred to the interparliamentary relations by pointing the remarkable role of the latter in developing and enriching the political dialogue between Armenia and France.

The sides also had a conversation on the efficient Armenian-French parliamentary cooperation at multilateral platforms.