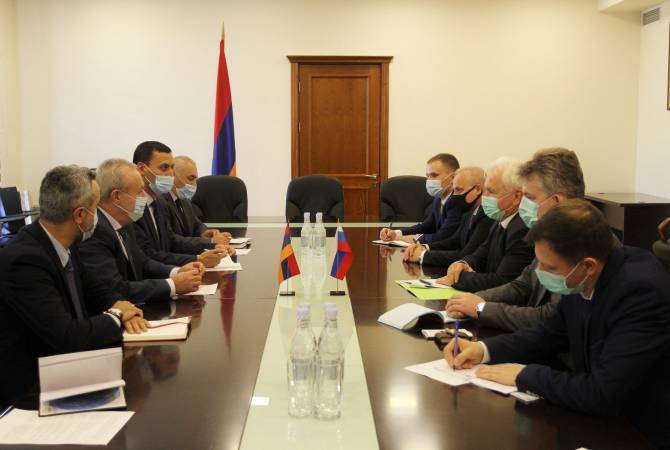 
YEREVAN, 19 OCTOBER, ARMENPRESS. Minister of Education, Science, Culture and Sport of Armenia Vahram Dumanyan received Chief of the Presidential Directorate for Interregional Relations and Cultural Contacts with Foreign Countries – Igor Maslov, who is in Armenia on a working visit.

Minister of Education, Science, Culture and Sport Vahram Dumanyan greeted the guests, noting that the frameworks of cooperation with Russian Federation are very broad, from education and science to culture and sports. According to the Minister, for the Armenian side the implementation of joint projects in the field of science is of special importance.

In the framework of cultural cooperation, Russian days in Armenia and Armenian culture days in Russia have become a tradition, which last year and this year didn’t take place because of the pandemic and war situation. The Minister expressed confidence that in 2022 those events will definitely be implemented.

Referring to the issues on the agenda of Armenian-Russian cooperation Vahram Dumanyan attached importance to the support of the Russian side to the issue of protection of the Armenian historical and cultural heritage that passed under the control of Azerbaijan as a consequence of the 44-day war, highlighting that those are also universal values.

He also noted that the Armenian side attaches importance to the development of the Russian language in Armenia and is ready to discuss new proposals of initiatives in the framework of the requirements of the Armenian legislation. In this context the parties particularly attached importance to the increase of efficiency of teaching of Russian, educational programs, improvement of textbooks.

During the discussion there was a reference also to the activity of the Armenian-Russian University. Minister Vahram Dumanyan mentioned that it is one of the leading universities of Armenia and the governments of the two countries as founders of the university should make efforts for its development.

During the meeting a number of issues related to bilateral cooperation in the fields of education, science, culture and sports were also raised.