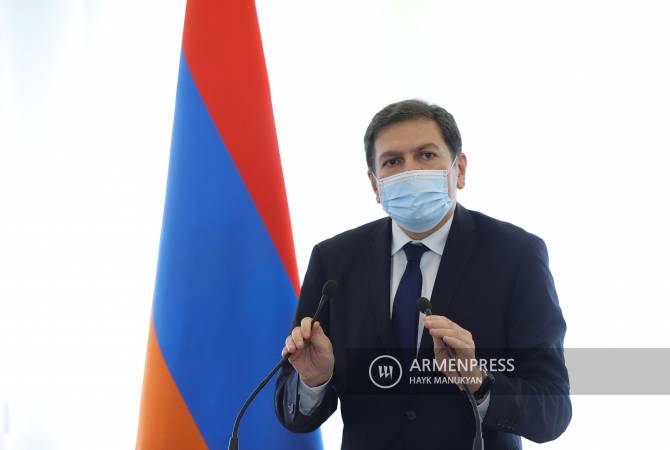 
YEREVAN, OCTOBER 18, ARMENPRESS. Both Armenia and Azerbaijan committed themselves, upon their accession to the Council of Europe, to use only peaceful means for settling the Nagorno Karabakh conflict. The 44-day war in 2020 demonstrates that Azerbaijan has neglected this commitment, thus, it should be properly addressed by the Council of Europe, Deputy Foreign Minister of Armenia Vahe Gevorgyan said in his remarks delivered at the meeting with the ambassadors on the occasion of the 20th anniversary of Armenia’s membership to the CoE.

Armenpress presents the text of the deputy FM’s speech:

I am glad to welcome you at the Ministry of Foreign Affairs of Armenia.

Following the World War II, the European leaders initiated the process of promoting the principles of democracy, human rights and the rule of law throughout Europe, as cornerstones of the peaceful future of Europe. Thus, the first Pan-European institution - the Council of Europe was founded on May 5, 1949, by the Treaty of London, which already has 47 full members. The city of Strasbourg in the Alsace region was symbolically chosen as the headquarters of the organization.

On many occasions, particularly in the last two parliamentary elections the people of Armenia once again reaffirmed their commitment to democracy, human rights and rule of law.

The Action Plan - one of the toolkits of the Council of Europe, through which the organization helps Armenia and other countries to fulfill their commitments and introduce European standards, is essential for Armenia. Currently, the fourth 2019-2022 Action Plan for Armenia is ongoing. Distinguished Ambassadors, this project is implemented through the voluntary contribution of your countries and the EU and I would like to express our gratitude in this regard.

The activities of the European Court of Human Rights are of utmost importance in terms of ensuring the rights of the citizens of Armenia. The court also has a significant role in protecting the rights of Armenian prisoners of war and civilian captives being held in Azerbaijan as a result of the 44-day war unleashed against Artsakh.

It is important to highlight that both Armenia and Azerbaijan committed themselves, upon their accession to the Council of Europe, to use only peaceful means for settling the Nagorno-Karabakh conflict. Therefore, the 44-day war in 2020 demonstrates that Azerbaijan has neglected this commitment, thus, it should be properly addressed by the Council of Europe.

You are well aware of the challenges Armenia encounters today. The humanitarian consequences of the war of aggression unleashed by Azerbaijan against the people of Artsakh are one of the most urgent issues. The involvement of our international partners, including the Council of Europe, is of utmost importance. We consider that there should not be any “grey zones” in Europe for people to exercise their fundamental rights.

The Secretary-General, the Commissioner for Human Rights, the PACE, the European Court of Human Rights, and relevant monitoring bodies have already tried to react in accordance with their mandates. Yet, the Committee of Ministers still has its role to play and I believe your presence here will help to move forward”.

19:30, 01.14.2022
Viewed 1669 times Russian MFA issues statement on the results of the meeting between the special representatives of Armenia, Turkey

10:38, 01.15.2022
Viewed 1543 times CCAF calls on French government to demand apology from Azeri authorities or else recall ambassador over Aliyev’s threats