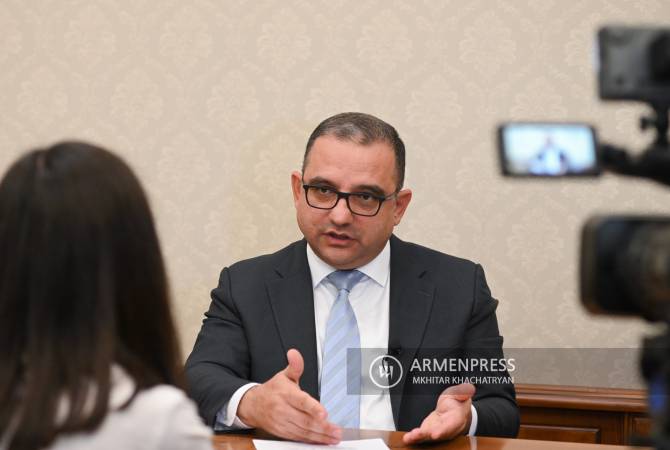 
YEREVAN, OCTOBER 18, ARMENPRESS. Armenia’s 2020 state budget draft, which has been approved by the government and has been submitted for the Parliament’s debate, is expected to greatly lower the state debt and increase the tax revenues, Minister of Finance Tigran Khachatryan said in an interview to ARMENPRESS.

“Compared to 2020, as a precondition for a stable macroeconomic policy, we plan to greatly lower the debt with the results of 2022. As of 2020, we had a 63.5% debt against GDP. We believe that 2022 would be the year that this figure will be approximately 60% against GDP, which is a very important precondition for ensuring favorable environment for macroeconomic stability and long-term economic growth”, the minister said.

The government plans to greatly increase its tax revenue opportunities. It’s expected that in 2021 the taxes against GDP must be nearly 22.5%, whereas in 2022 it’s expected to be nearly 23.4% with the improvement of tax collection process.

The law on the State Budget envisages financing the infrastructure programs worth over 350 billion drams, whereas in 2021 this money was nearly 215 billion drams.

The economic growth is expected to be 7% in 2022. This is the minimum assessment put on the basis of the government’s five-year action plan.

As for the inflation, the minister said that it is high this year. The Central Bank is running a respective policy to return it to manageability by the end of the year. “In 2022-2023 the inflation is expected to return to a medium-term policy target framework, in other words the Central Bank would seek to return it to about 4% within two years. It would be much stable than it is expected in 2021”, the minister added.