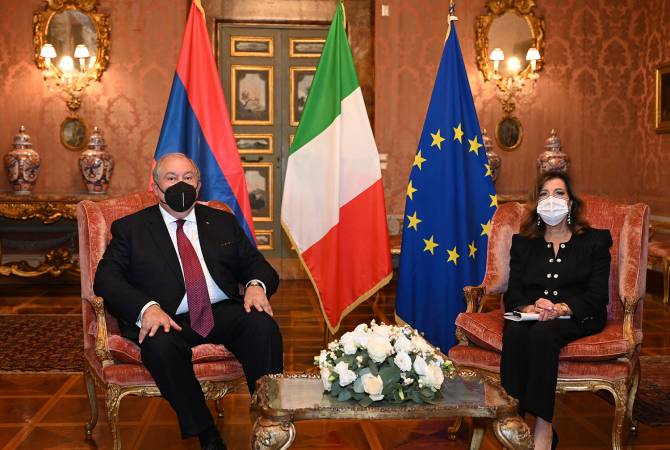 As ARMENPRESS was informed from the press service of the President’s Office, welcoming the Armenian President on behalf of the Senate and her own behalf, Maria Casellati once again recorded with satisfaction the firm relations between the two countries. She said that the state visit of the President of Italy to Armenia in 2018 and the state visit of the President of Armenia to Italy today are a great impetus for cooperation between the two countries. Considering culture as an essential component of bilateral cooperation, she highlighted the activities of the Regional Center for the Preservation and Management of Italian Cultural Heritage opened in Yerevan in 2018.

Agreeing that the relations between the two countries are based on historical and cultural ties, the President of Armenia said that our peoples have millennia-old historical ties, and for the last two thousand years, they have also shared Christian history. ‘’We are nations who have always greatly valued culture, knowledge and arts’’, President Sarkissian said.

The President of Armenia highlighted the meetings with the heads of the legislatures within the framework of his foreign visits, considering the important role of the parliaments in the development of interstate relations, the formation of an atmosphere of mutual trust and understanding.

"We are interested to see closer ties between the parliaments of the two countries, including in international organizations, within the framework of interparliamentary assemblies," said President Sarkissian.

The interlocutors also spoke about regional developments and problems. In particular, President Sarkissian touched upon humanitarian issues, noting in this context that despite the efforts and calls of the international community, Azerbaijan continues to detain Armenian prisoners of war.

The directions and prospects of Armenia-European Union cooperation were also touched upon.