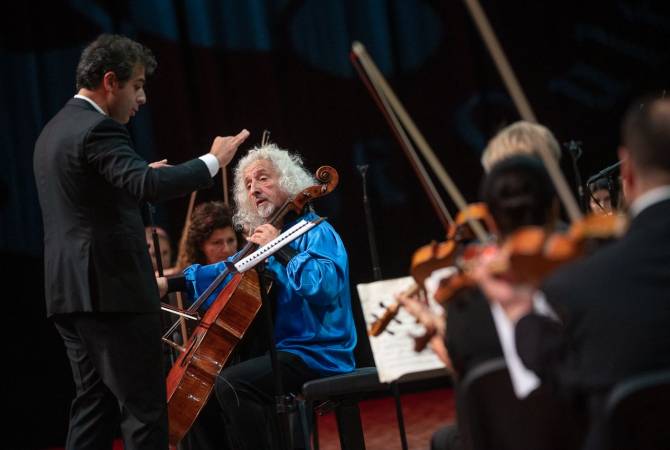 
YEREVAN, SEPTEMBER 21, ARMENPRESS. Cellist virtuoso Mischa Maisky and the Malta Philharmonic Orchestra lit up the stage at the Coca-Cola Arena under the baton of Sergey Smbatyan at the InClassica Dubai International Music Festival 2021 on September 16, performing Alex Vella Gregory, Tchaikovsky and Joseph Vella.

Inspired by the warm reception and ovations from the audience, who seemingly drifted away to the abode of spiritual pleasures from their love to classical music, Smbatyan said that the evening was special for him.

“What matters is that we had the chance to present the work of Maltese composers. It is always nice to perform Malta’s music,” Smbatyan said, adding that working with the renowned cellist Mischa Maisky was impressive.

“The experience of performing with Maisky on the same stage was simply amazing,” Smbatyan said.

Maisky himself admitted that he loved the concert because the Dubai audience is very emotional.

“I was actually surprised with such reception, given the fact that this is a non-orthodox arena for classical music. I was happy to perform together with the Malta Philharmonic Orchestra and Sergey Smbatyan, they have passion for music. We’ve had some discussions and made plans with Smbatyan. It  is possible that we perform in Armenia. I’ve already been to Armenia and I have very good memories,” Maisky said.

11:29, 05.19.2022
2225 views U.S. recognizes role of population of Nagorno-Karabakh in deciding its future–Ambassador Tracy’s interview to ARMENPRESS