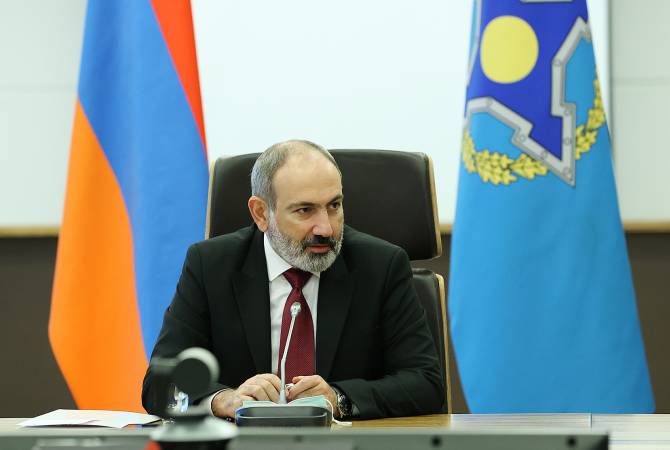 
YEREVAN, SEPTEMBER 17, ARMENPRESS. Armenia is strongly interested in the effective restraint of threat of international terrorism in the CSTO and the Shanghai Cooperation Organization’s space, considers unacceptable the use of terrorist groups by separate countries for achieving some military-political goals, Prime Minister Nikol Pashinyan said at the joint session of the CSTO and the Shanghai Cooperation Organization in Tajikistan, Armenpress correspondent reports from Dushanbe.

First of all, the Armenian PM congratulated the session participants on the 20th anniversary of the Shanghai Cooperation Organization, stating that over the past years this Organization has developed as an important cooperation platform in the fields of regional security and partnership. Pashinyan also thanked the President of Tajikistan for the warm reception and the organization of today’s meeting.

He noted that the statements made at the preliminary stage about the wish to end the military operations, pardon the officials, create an inclusive coalition government, respect the rights of women in the Islamic legal system and eradicate the production of drugs in the country were accepted with optimism by the international community. “The implementation of such actions would have contributed to the establishment peace, discipline and stability in the country. However, we have to note that at this stage these intensions are not seen yet in the actions of the Taliban. We are confident that the guarantee to the long-term settlement of the situation in Afghanistan is the fair political process with the involvement of all Afghans and with the representation of all ethnic and religious communities in the country”, Pashinyan said.

For this purpose he stated that all sides must demonstrate soberness and reaffirm their readiness to solve all disagreements exclusively through dialogue and negotiations.

“As a member state of the CSTO, we wished to see peace and calmness in the entire responsibility zone of the CSTO, in all regions of the collective security. Armenia is strongly interested in effectively curbing the threat of international terrorism in the CSTO and the SCO regions. In case of the absence of an adequate response at the right time, this could lead to further escalation of the situation and the infiltration of terrorist networks to neighboring countries and especially conflict zones. We strongly condemn terrorism and extremism in all their forms and manifestations. The use of terrorist organizations by separate countries for some military-political goals is particularly unacceptable”, Pashinyan added.

He stated that Armenia calls for closer dialogue and mutual partnership in this respect, first of all at the level of law enforcement agencies and special services, for exchange of experience and information, as well as for conducting effective joint operations for neutralizing terror threat within the frames of mechanisms operating in our Organization.