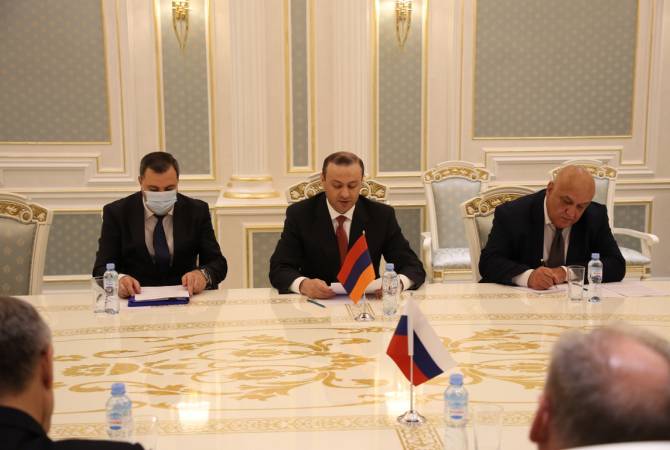 Armen Grigoryan told his Russian counterpart that such frequency of bilateral meetings shows both countries’ interest in deepening the partnership between the two Security Councils, as well as developing the ties between Armenia and Russia in the security sector.

Thereafter, the officials discussed the current situation in the South Caucasus. In this context Armen Grigoryan introduced his Russian counterpart on the current situation caused by the recent illegal incursion of the Azerbaijani armed forces into Armenia’s sovereign territory, stating that any encroachment against the territory of Armenia is unacceptable. He added that Armenia is ready to start the border demarcation and delimitation process as soon as possible.

Talking about the possibility of establishing long-term peace in the region, Armen Grigoryan said the government of Armenia has announced “the era of peace” which would bring peace and development opportunity to the South Caucasian region, highlighting on this path the opportunity of unblocking all infrastructure.

Nikolai Patrushev also emphasized the importance of continuing the works on unblocking process, stating that it will enable to ensure stable peace in the region.

Touching upon the efforts on solving the Nagorno Karabakh conflict, the Russian Secretary of the Security Council highlighted activating the process within the Minsk Group Co-Chairs.

11:29, 05.19.2022
2307 views U.S. recognizes role of population of Nagorno-Karabakh in deciding its future–Ambassador Tracy’s interview to ARMENPRESS