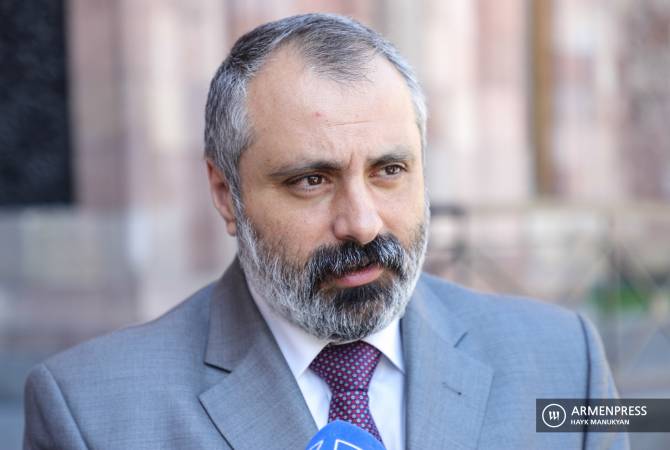 
YEREVAN, SEPTEMBER 2, ARMENPRESS. Foreign Minister of Artsakh Davit Babayan has commented on the recent statements of Azerbaijani President Ilham Aliyev made in the occupied Shushi, stating that “these statements are gross violation of international law, manifestation of Nazism and terrorism”.

In an interview to ARMENPRESS, Mr. Babayan said first of all it is necessary to thank Aliyev for such statements because it shows his main goals. “Countries spend huge sums of money to know the intentions of the enemy, but this one says everything. I have repeatedly stated that Aliyev is the most honest enemy, he has never hidden his intentions. Of course, what Aliyev says is a gross violation of international law, is Nazism and terrorism, and we must never be cut off from reality, we must understand who we are dealing with. All these statements once again prove that we will never be part of Azerbaijan. And what he is saying is his business. The important for us is to be able to recover and create a reliable future for our generations”, Davit Babayan said.

On August 30 Azerbaijani President Ilham Aliyev made a number of anti-Armenian statements in the occupied town of Shushi. In particular, the Azerbaijani leader stated that “there is no such concept of a Nagorno Karabakh Republic”. Aliyev also said that “the current course of events, the second Karabakh war and the actions of international role players show that the [Nagorno Karabakh] issue could never be solved through negotiations”. Aliyev claimed that all norms and principles of the international law, in particular the UN Charter, the resolutions of the UN Security Council, the “historical justice”, have given a right to Azerbaijan to solve the issue with military means, if it is not solved peacefully. However, the experts note that the norms and principles of the international law, including the UN Charter and the resolutions of the UN Security Council do not give a right to any subject to solve conflicts by force.