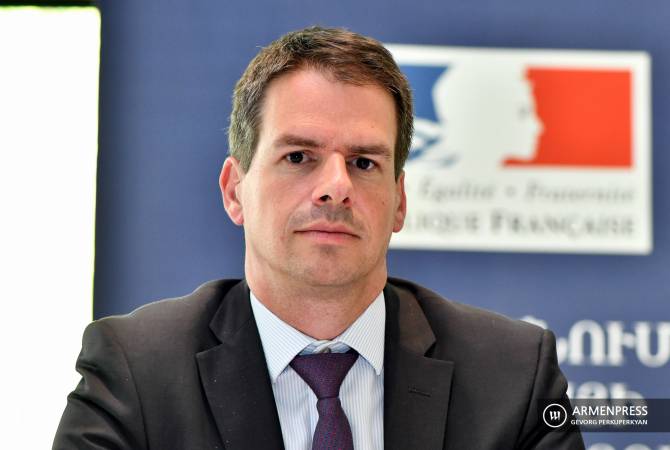 
YEREVAN, JULY 28, ARMENPRESS. France will consider appeals by Armenia on support in the field of defense, however, one should take into account that Armenia and France are not members of the same military alliance, French Ambassador to Armenia Jonathan Lacote said during a press conference today.

“In general, our goal is not to prepare for any future war, but to avoid war because I think that the problems existing in the region must not be solved by force, the Karabakh issue, the Armenian-Azerbaijani border issue must be solved only through negotiations. Any alternative will lead to deadlock”, he said.

As for French President Emmanuel Macron’s possible visit to Armenia, the Ambassador said he really has been obliged to come back to Armenia during the 2018 La Francophonie summit.

“As of this moment there is no concrete date yet. But, overall, I can state that President Macron will visit when the visit would be useful for assisting the political processes in the region. At that moment we will see clearly what document could be signed between Armenia and France”, the Ambassador said, commenting on the possibility of signing any document between the sides.

On July 28, at around 03:40, the Azerbaijani armed forces launched a provocation and violated the ceasefire in the northern-eastern section of the Armenia-Azerbaijan border. Three Armenian servicemen have been killed, two others have been wounded in action. The Azerbaijani attacking forces have been repelled to their initial positions, suffering losses. The sides have reached an agreement on ceasefire at the mediation of the Russian side.