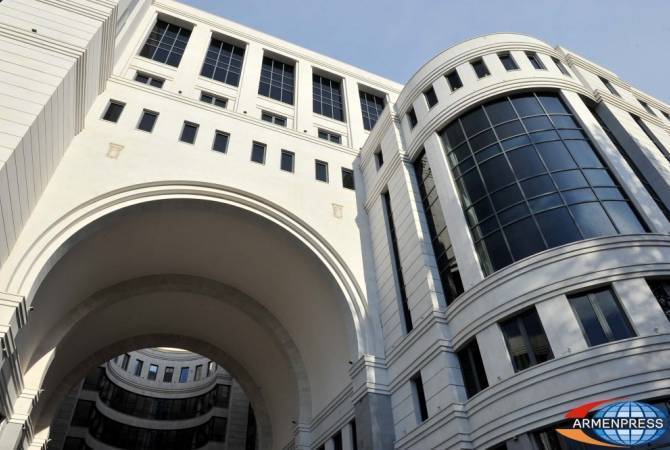 
YEREVAN, JULY 23, ARMENPRESS. By his recent anouncement president of Azerbaijan Ilham Aliyev admits the fact that the Azerbaijani forces are in the Armenian territory, the press service of the Foreign Ministry of Armenia said, anwering the inquiry of ARMENPRESS news agency.

The Foreign Ministry of Armenia also emphasized that those provocative measures of the Azerbaijani president are accompanied by the the circulation of the so-called ''Zangezur corridor'' formulation, which is totally against the famous trilateral statements.

Referring to Aliyev's comments about the last Artsakh war, the Foreign Ministry of Armenia said that though the Azerbaijani president clearly shows that the goal of the war unleashed against Artsakh pursued the goal of erasing Nagorno Karabakh from the regional map, ''Reconsideration of its international commitments and use of force by Azerbaijan cannot lead to Nagorno Karabakh's disappearance from the international arena’’.

Question – In an interview to Azerbaijan’s public AzTV, president of Azerbaijan Ilham Aliyev made another announcement with territorial claims against the Republic of Armenia. How would you comment on that announcement?

Answer – The Azerbaijani president made a number of comments in his interview and we will refer to some of them which clearly show the approaches of the Azerbaijani leadership of making use of force a tool for regional policy.

First, in the mentioned interview the Azerbaijani presint, in fact, admits the fact that the Azerbaijani forces are in the territory of the Republic of Armenia, justifying that with the claim that ''Zangezur is the land of our ancesstors''. This is nothing but a gross violation of international law, as no international norm or principle accepts the attempt to occupy the territory of a neighboring state with a similar historical, in this case, distorted "justification".

It should be noted that those provocative measures of the Azerbaijani president are accompanied by the the circulation of the so-called ''Zangezur corridor'' formulation, which is totally against the November 9, 2020 and January 11, 2021 trilateral statements, which contain a provision on unblocking the existing economic and transport communications. The Azerbaijani side, realizing the baselessness of its international law violating demands, tries to present its readiness to solve the issue by force as an argument.

Secondly, the president of Azerbaijan clearly states that the war unleashed against Artsakh was aimed at erasing Nagorno Karabakh from the map of the region, and depriving the people of Artsakh of their homeland. Nagorno Karabakh, as a territorial unit, is recognized in a number of international documents, most of which have been joined or agreed by Azerbaijan. Azerbaijan's reconsideration of its international commitments and use of force cannot lead to the disappearance of Nagorno Karabakh from the international arena. This approach obviously pursues the goal of violating the human rights of the people of Artsakh, including the right to self-determination, as well as the territorial integrity of Artsakh.

Fourth, Azerbaijan continues its policy of deepening rather than overcoming the humanitarian consequences of the war, which is reflected in the suspension of its commitment to the exchange of prisoners of war and other civilian hostages, and the criminal persecution of those persons under false charges, as well as the continious promotion of anti-Armenianism.

Fifth, the use of force, the threat of force can not create lasting peace, it is fraught with dangers for all the countries and peoples of the region.

Armenia will consistently pursue the goal of exercising the right of the Artsakh-Armenians to self-determination in the territory of Artsakh, defending the territorial integrity of the Republic of Armenia, based on international law.

11:29, 05.19.2022
3069 views U.S. recognizes role of population of Nagorno-Karabakh in deciding its future–Ambassador Tracy’s interview to ARMENPRESS