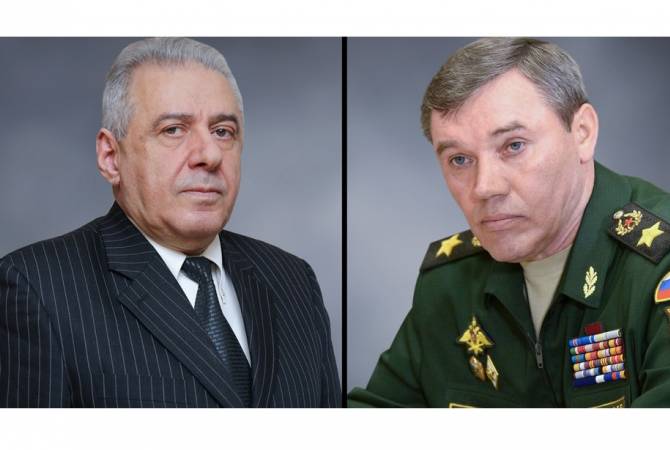 
YEREVAN, JULY 8, ARMENPRESS.  The acting Minister of Defense of the Republic of Armenia Vagharshak Harutyunyan had a telephone conversation with the Chief of the General Staff of the Rassian Armed Forces, General of the Army Valery Gerasimov on July 8, ARMENPRESS was ifnormed from the press service of the MoD Armenia.

The interlocutors discussed the situation on the Armenian-Azerbaijani border of Gegharkunik and Syunik regions, the ways to resolve it, as well as the course of the mission carried out by the Russian peacekeeping contingent in the Artsakh Republic.

Vagharshak Harutyunyan and Valery Gerasimov touched upon the agenda of the talks with the Russian Defense Ministry delegation arriving in Armenia in the coming days to discuss bilateral programs and actions aimed at deepening the Armenian-Russian military cooperation, as well as the process of large-scale reforms launched in the Armenian Armed Forces.

19:30, 01.14.2022
Viewed 1595 times Russian MFA issues statement on the results of the meeting between the special representatives of Armenia, Turkey