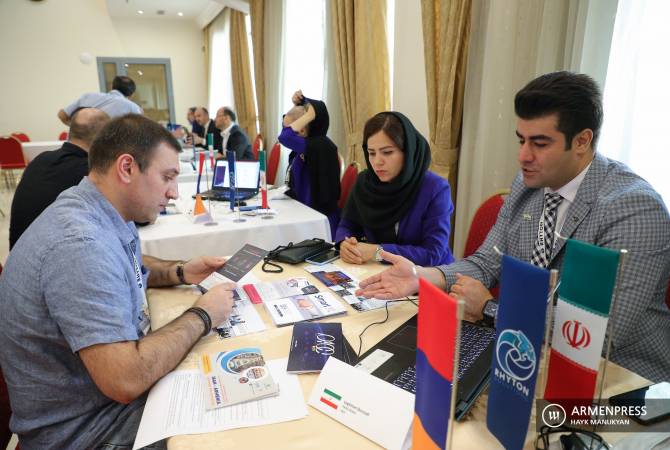 
YEREVAN, JUNE 29, ARMENPRESS. Armenian and Iranian businessmen put a beginning for talks aimed at boosting the commercial ties during the Armenia-Iran business forum launched in Yerevan on June 29.

A delegation of Iranian high-tech companies have visited Yerevan on the sidelines of the forum.

Rhyton Solutions company director Masoud Hassani told reporters that they are in Armenia for the first time, but noted that there has already been cooperation.

“IT cooperation has already been in Armenia, they have ordered programs in us, and we have implemented them. We can implement bigger programs after this forum in different formats”, he said, adding that they will have a number of meetings with the IT companies in Armenia.

Another representative of the Iranian delegation Emade Askaria said they plan to further raise the cooperation between Iran and Armenia.

“We want to start a production in Armenia, and then to enter into the global market together with the Armenian companies. This forum is attended by 10 Iranian and 40 Armenian companies, I hope we will reach beneficial agreements today”, the Iranian delegation member said.