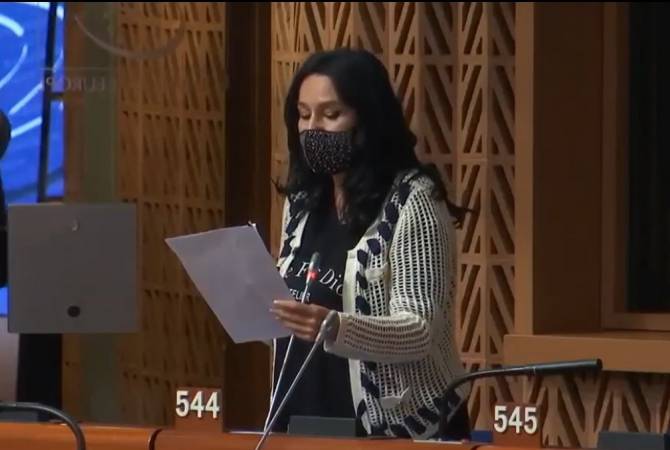 
YEREVAN, JUNE 23, ARMENPRESS. The Parliamentary Assembly of the Council of Europe (PACE) has hosted a discussion on media freedom and citizen’s right to get accurate information.

Member of Parliament of Armenia Naira Zohrabyan participated in the discussion, talking about the manipulations of public opinion by fake news, bringing Azerbaijan as an example where the media was in the forefront for spreading hatred and hostility against Armenia.

The lawmaker called on to introduce tougher legislative regulations in the CoE member states for hatred and hostility campaign with fake news, considering this one of the greatest challenges facing Europe.

Dear colleagues, today we are discussing a very important report on media freedom and citizen’s right to get accurate information.

Yes, in our information world, media in many cases is much more than the most powerful weapon.

And in our European family there is a country, even the most cursory monitoring of its media field is terrible. When the leader of that country speaks about the causes of their victory in the recent Artsakh war and states that they won because they managed to educate generation who grew up with hatred and hostility against Armenians, he is right, and the Azerbaijani media had a great contribution to this because they spread and continue spreading Armenophobia, violence, hatred and falsification.

When an Azerbaijani politician announces that Armenians must be killed in Karabakh, and it is being spread by the Azerbaijani media, when a 13-year-old Azerbaijani girl announces that she wants to become a sniper in order to kill an Armenian, and this becomes the top lead of that country’s media, we have the terrible picture which we had during the recent bloody war and after that – atrocities, lie, fake news and media manipulations.

These days the trial of Armenia soldiers is underway in Azerbaijan, whom Azerbaijan presents as terrorists and saboteurs, and the whole Azerbaijani media is filled with spreading disinformation, and now what accurate information and protecting society form fake news are we talking about? Today, under the free media flows, if we do not manage to protect our societies from fake news, which especially in totalitarian countries feeds societies with racism, intolerance and lie, we will have Azerbaijan as a result, where the media field is daily filled with videos torturing and humiliating the Armenian prisoners of war and the public opinion which welcomes all these”, she said.