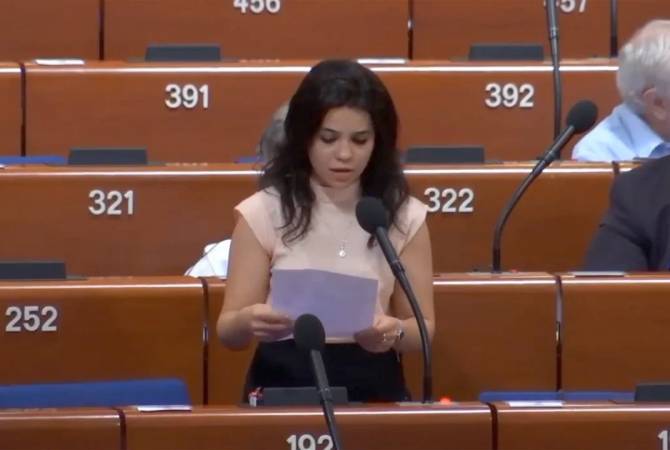 
YEREVAN, JUNE 21, ARMENPRESS. Member of the ruling My Step faction of the Armenian Parliament Tatevik Hayrapetyan has raised the issue of the Armenian prisoners of war illegally held in Azerbaijan during the summer session of the Parliamentary Assembly of the Council of Europe (PACE).

“I would like to quote literally the talk of Azerbaijani President Ilham Aliyev with wife of Turkish president – Emine Erdogan, which took place about a week ago during their visit to occupied Shushi. Emine Erdogan is asking Aliyev whether there are many Armenian POWs held in Baku. In response, Aliyev notes with joy that yes, there are many. Emine Erdogan says “very good, return them in small “portions”. This is their conversation literally, the video is available on YouTube. Azerbaijan and Turkey are members of the Council of Europe, but their leaders behave in this way. This not only contradicts the logic of the international law, but also is just something abnormal and inhuman. And every time we visit here, the families of POWs ask us –what does the Europe do to help return our sons? We answer that “they discuss, condemn and as a result we have return of POWs in small “portions”, meanwhile there are many captives in Baku, and their families are suffering”, the lawmaker said.

She said more than have a year has passed since Armenia, Russia and Azerbaijan signed the ceasefire statement. Armenia has fulfilled its commitments, it’s Azerbaijan that refuses to do that.

“We are very grateful to you, but we want to remind you that it is your obligation to immediately return all prisoners of war in accordance with the trilateral statement. I want to note that peace is not just a beautiful word, we value peace more than any other nation because we know what it is – to lose beloved people, be in war, but peace supposes action, hard work, but the Azerbaijani form of peace means to infiltrate into Armenia’s sovereign territory, hold the Armenian POWs as captive, dehumanize the Armenian people at a state level, and then come here and talk about peace. Azerbaijani colleagues, if you want peace, go back to your country and force your dictator Aliyev to act in accordance with the international law – to return the Armenian POWs and pull back from Armenia’s sovereign territory. We do not want war, no one wants war, but if you want peace, then act”, the Armenian MP said.