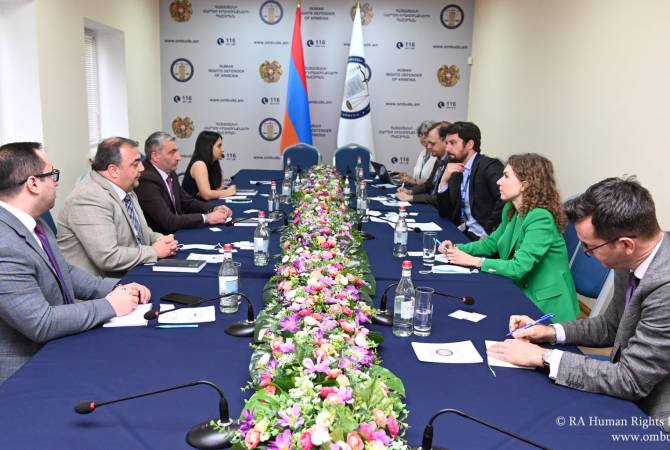 
YEREVAN, JUNE 16, ARMENPRESS. Heads of two departments at the Office of Human Rights Defender of Armenia Armen Mashinyan and Artyom Sedrakyan received on June 15 head of the OSCE/ODIHR observer mission Eoghan Murphy and his delegation, the Ombudsman’s Office told Armenpress.

Artyom Sedrakyan introduced the guests on the activity of the working group formed at the Office of the Ombudsman aimed at monitoring the upcoming snap parliamentary elections in Armenia. This group will operate in an emergency mode before and after the election stages, as well as on the voting day. Artyom Sedrakyan expressed his concerns over the fact that the political forces and their supporters are using hate speech, insult one another during the campaign period. He stated that the monitoring of the Ombudsman shows that such speech is also spread on social networks, among supporters which further increases the tension and contains risks of their transfer to real life.

In his turn Armen Mashinyan presented the data registered during their monitoring, connected also with the distribution of election bribe, abuse of administrative mean, etc.

The Office of the Ombudsman highlighted the impartial observation of the elections by the OSCE/ODIHR.

At the meeting the sides expressed readiness to cooperate aimed at guaranteeing human rights in the elections.