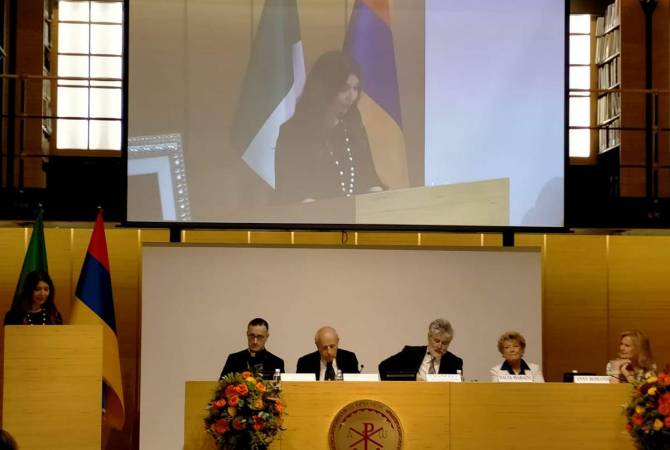 
YEREVAN, JUNE 11, ARMENPRESS. The memory of the Armenian Genocide should guide the international community to work on the prevention of similar tragedies, Armenian Ambassador to Italy Tsovinar Hambardzumyan said at an event organized at the Pontifical Oriental Institute in Rome.

The Armenian Mother, by Italian groups of painters Madenotte, has been presented at the event. One of the group members stated that this work is dedicated to the memory of the Armenian Genocide, as it is inspired by a photo made in Aleppo during the Genocide years which shows Armenian mother mourning with her daughter the death of her fallen junior daughter. The original photo is currently held in the library of the US Congress.

The Armenian Ambassador thanked Italy for the respect to universal human rights and values, as well as for the attitude towards Armenia and its people. She also expressed gratitude to everyone who stood by the Armenian people during the difficult times.

The Italian translation of “My Armenian Grandmother” book by French writer Anny Romand was also presented at the event.