Azerbaijan is not alone, it would never dare to carry out such operation on its own  - Pashinyan   | ARMENPRESS Armenian News Agency

Azerbaijan is not alone, it would never dare to carry out such operation on its own  - Pashinyan 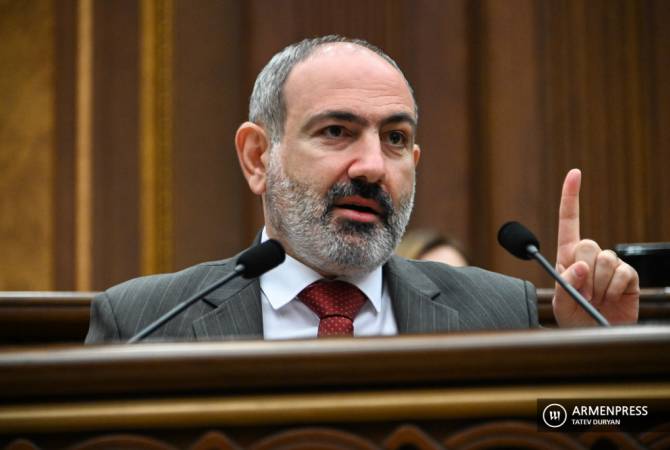 
YEREVAN, MAY 26, ARMENPRESS. Armenia has presented two proposals over the working document on demarcation, but has received no response, ARMENPRESS reports caretaker Prime Minister of Armenia Nikol Pashinyan said during parliament-Cabinet Q&A session, referring to the question of an opposition MP if he plans to sign that document.

‘’I have announced that there is no option where we sign a document without the withdrawal of (Azerbaijani) forces. We have offered to options, either Azerbaijan withdraws forces after which the signing of the document takes place, or  it’s clearly mentioned in the document that must be signed the terms of the withdrawal of the Azerbaijani forces. Back then, when the document had not been leaked, we presented to written proposals over it, one of which was about the full return of the hostages and the second was the geographic coordinates that Azerbaijanis should abandon. Since then nothing new has happened’’, Pashinyan said, emphasizing that the armed groups of the Azerbaijani army must leave the territory of Armenia, there is no alternative to that and it’s not an issue for discussions.

Pashinyan also noted that he does not know who Azerbaijan coordinates its operations with. Nikol Pashinyan thinks that Azerbaijan would never dare to carry out such an operation on its own. ‘’I think that Azerbaijan coordinated its activities in advance with some payers, but we don’t know anything for sure and have to work in that direction. And in case of necessity, when we have reliable information that this plan has been coordinated with some international entities, we will openly and publicly tell it to our people. And maybe we should publicly and openly tell our people what kind of developments took place during the last 3-5 maybe 10 years. It’s very important to understand what happened over Karabakh issue during the last 15 years’’, Pashinyan said.

The caretaker PM said that in this stage Armenia continues working with its CSTO partners and in the near future defense minister Vagharshak Harutyunyan will pay a visit to Russia. ‘’And we think that we will receive the answers to some questions and continue deepen our cooperation with our CSTO partners and our first security ally Russian Federation’’, he said.