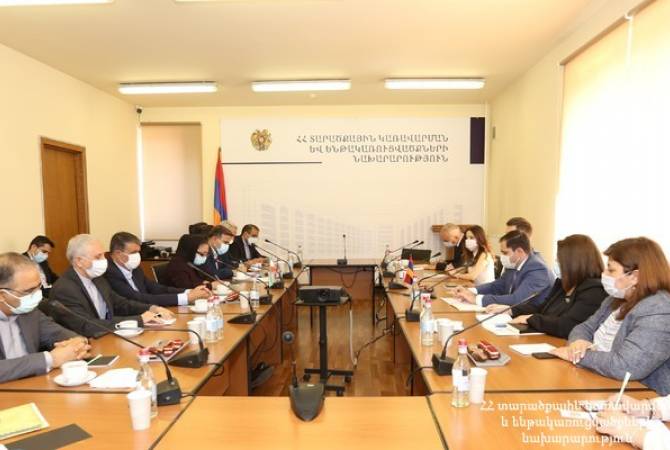 They discussed the possibilities for enhancing the partnership between the two countries in road transportation sector, and also the construction of the interstate highways spanning to the Armenian-Iranian border, as well as issues of bolstering Armenia-Iran transit shipments and regulations and facilitations in the cargo transportation procedures, the ministry said in a readout.

Papikyan expressed certainty that Eslami’s visit will boost the further development of Armenian-Iranian transport communication. He presented to his Iranian counterpart the Armenian government’s priorities in improving road and transport infrastructures, including by highlighting the construction of the North-South highway and the possibilities it will create in increasing trade-economic turnover between the ports of the Persian Gulf and the Black Sea.

Minister Eslami reaffirmed Iran’s readiness towards mutually-beneficial initiatives contributing to deepening of economic ties, namely in bringing to life the Persian Gulf-Black Sea international transport corridor project. Eslami expressed Iran’s interest in expanding auto and rail communication with Armenia and involvement in the construction of the southern parts of the North-South road. In this context the sides exchanged ideas over the possibilities of enhancing the participation of Iranian companies in the projects aimed at infrastructure improvement in Armenia.

Papikyan briefed his Iranian counterpart on the development and launch of construction of the Sisian-Kajaran and Kajaran-Agarak parts of the North-South road. Stressing that high-level standards of construction are ensured, the minister said that involving state resources will create good prerequisites for the involvement of foreign, including Iranian construction companies.

Issues of facilitating the procedures and regulations in transit cargo shipments were also discussed. Papikyan said that the Armenian government has initiated a package of legislative changes which envisages to revise the tariffs and calculation parameters of the payments charged for Iranian transit cargo shipments through Armenian territory, and that as a result of the changes the tariffs will be lowered several times.

Other issues of inter-departmental cooperation were also discussed, and the joint work within the framework of the Armenian-Iranian intergovernmental commission was touched upon.