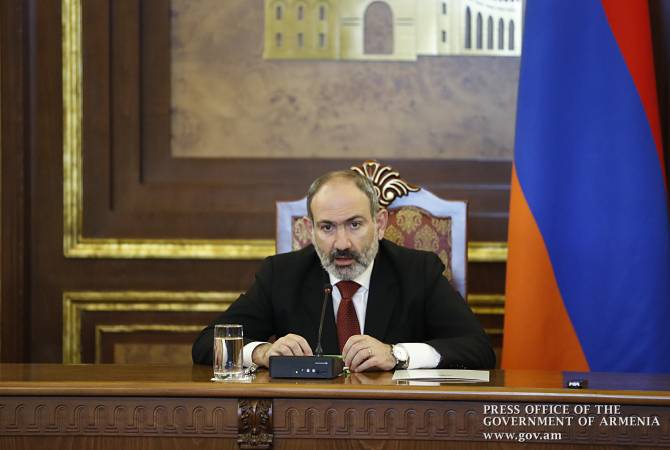 
YEREVAN, MAY 13, ARMENPRESS. Presenting the situation in some bordering areas in Gegharkunik and Syunik Provinces of Armenia during the Security Council session, caretaker Prime Minister of Armenia Nikol Pashinyan tasked relevant state bodies to start consultations with the CSTO for preventing any future escalation.

''This is the second day we have an explosive situation around the Sev Lake and nearby territories in Syunik Province. The reason is that some groups of the Azerbaijani armed forces have trespassed the state border of Armenia and took actions to surround the Sev Lake.

The Armenian Armed Forces took tactical measures. The Azerbaijanis withdrew in some surrounding territories as a result of the tactical counter-measures of our Armed Forces. Neither the Armenian, nor the Azerbaijani side have so far used firearms or other weapons.

Anyway, nearly 250 Azerbaijani servicemen continue remaining inside the Armenian territory, in some sections of Syunik and Gegharkunik Provinces.

An in-depth and comprehensive assessment of the situation makes it clear that what the Azerbaijanis carried out was a provocation that can have much broader military-political goals.

I mean, the Azerbaijanis may have crossed the Armenian-Azerbaijani border in those areas not to solve some local problems, but to provoke a military conflict. The following facts prove that. 1st - the representatives of the Azerbaijani armed forces try to explain their presence in those areas by presenting obviously falsified maps, trying to assert that it is an Azerbaijani territory. As I have already mentioned, the maps approved during the Soviet Union make it clear that these claims of Azerbaijan have no basis, something that Azerbaijanis themselves know.

2nd – on the day of the provocation Azerbaijan announced about holding large-scale military exercises with the participation of 15 thousand servicemen on May 16.

3rd – still back in April, the Azerbaijani president made overt threats against the territorial integrity of Armenia, saying that they will open a corridor between Azerbaijan and Nakhichevan by force, as he yells, in the form of ''Zangezur corridor''.

Our assessment is unequivocal: the current situation fully complies with paragraph 2 of Article 2 of the Collective Security Treaty, according to which ''In case of menace to safety, stability, territorial integrity and sovereignty of one or several Member States or menace to international peace and safety of the Member States shall immediately launch the mechanism of joint consultations for the purpose of their positions coordination, develop and take measures for assistance to such Member States for the purpose of elimination of the arisen menace’'.

Based on the above mentioned, I task the caretaker Foreign Minister of the Republic of Armenia Ara Ayvazian, caretaker Defense Minister Vagharshak Harutyunyan and Secretary of the Security Council Armen Grigoryan to take measures for starting consultations in line with 2nd Article of the Collective Security Treaty, particularly for coordinating the positions of the CSTO member states and eliminating the exisiting menace. Second, to take measures for launching the procedures provided by the Crisis response regulations of the Collective Security Organization of the December 10, 2010. I will remind that this procedure defines the mechanism for joint activities aimed at solving crisis situations.

I consider it necessary to emphasize that although at the moment we do not have any cases of shooting in the mentioned areas, a rapid reaction of the CSTO is necessary for preventing the future escalation and for protecting the territorial integrity of the Republic of Armenia, its stability and sovereignty. And we take those measures as a CSTO member state''.

“The CSTO closely follows the developments in the border regions of Syunik province, and if necessary, actions will be taken in accordance with the Collective Security Treaty and the CSTO Charter”, the statement says.