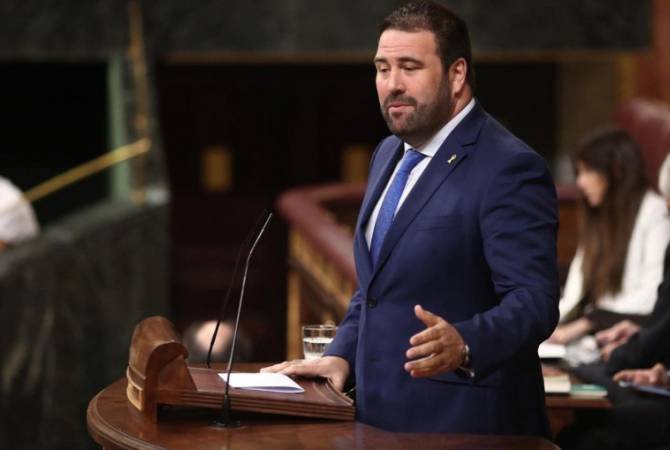 
YEREVAN, APRIL 26, ARMENPRESS. Member of Congress of Deputies of Spain Jon Iñarritu hopes that Spain as a State will recognize the Armenian Genocide as soon as possible. He says the international community should recognize it in order to show Turkey that his position is not admissible in historical, ethic and legal terms.

The Spanish MP gave an interview to ARMENPRESS:

-In your opinion, 106 years after the Armenian Genocide, what should be the main task of advanced humanity in terms of achieving recognition, condemnation and preventing such crimes?

-In my opinion the recognition of the Armenian Genocide is a pending issue for several States. It is a matter of historical justice with the Armenian people, but also should be a step as a guarantee of non-repetition of such serious crimes.

-Whether the recognition by Turkey is possible taking into account that country's aggressive and denialist policy?  What can the Armenian people expect in terms of fair reparation?

-I sincerely believe that with the current Erdogan government it is impossible and with others it is not a simple matter either. Turkey has been denying this Genocide for a century. The international community should recognize it in order to show Turkey that his position is not admissible in historical, ethic and legal terms.

-Are the recognition and Turkey's apology enough to restore the historical justice?

-I think that it could be a first step. That would help to improve the relations between the two nations Turkey and Armenia, but it would also be positive for the Turkish people.  An example to follow is Germany in terms of rejection of the Holocaust and the recognition of his historical responsibility.

Turkey would be a better country if they would do the same as Germany.

-What do you think what prevents Spain from recognizing the Armenian Genocide?  What are the views?

-In Spain the Armenian Genocide has been recognized by several parliaments, such as the Basque or Catalan, but it is pending that the Congress or the Spanish Government do so.

I think that it is clear that Turkey does a lot of pressure to avoid the recognition. I hope that Spain as a State will recognize it as soon as possible.