From visit to POWs up to search for bodies: Head of ICRC Delegation in Armenia gives interview to ARMENPRESS | ARMENPRESS Armenian News Agency

From visit to POWs up to search for bodies: Head of ICRC Delegation in Armenia gives interview to ARMENPRESS 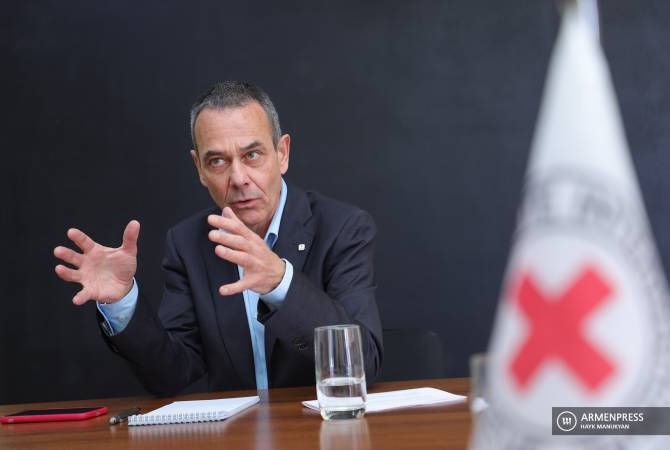 
YEREVAN, APRIL 1, ARMENPRESS. The recent war in Nagorno-Karabakh has put new tasks before the International Committee of Red Cross (ICRC)․ The organization is engaged in different activities, starting from the search operations for the bodies of the dead up to the visiting of the conflict-related detainees on the sides, as well as ensuring communication between the detained and their families.

Thierry Ribaux, Head of the ICRC Delegation in Armenia, gave an interview to ARMENPRESS, talking about the aforementioned.

- Dear Mr. Ribaux, the 2020 war in the Nagorno-Karabakh conflict zone put major tasks before the International Committee of Red Cross. Can you, please, present the priority directions of your activities in past months? What activities the Mission is mainly engaged in?

-The ICRC has been present in the region since 1992, we have delegations in Yerevan and Baku and the mission in Nagorno-Karabakh. We’ve had an uninterrupted presence all these years. Of course, the Nagorno-Karabakh conflict escalation in September-October triggered quite a surge in our response across the region, in particular, in Nagorno-Karabakh it was mostly an emergency response, supporting the hospital facilities, helping the population with food and non-food items. Here in Armenia, as many people fled the fighting, together with the Armenian Red Cross Society we also developed a response to help them cope with this situation, and we supported the health facilities and schools, etc. So, at the first phase, it was very much an emergency humanitarian response. We have been working for many years in Tavush region on resilience programs with the communities. This is something we would like to strengthen and further develop also in Syunik, Vayots Dzor and possibly Gegharkunik regions.

One of the key elements of our work is the support to host families and the displaced. And this support will be organized in cooperation with the Armenian Red Cross Society, aimed at helping the host families to cope with the additional burden of hosting those displaced following the Nagorno-Karabakh conflict escalation. Together with the Armenian Red Cross Society we are also looking at ways to support the displaced people or host families elsewhere in the country. One of the other key directions is connected with those who are still missing. The ICRC has been participating in the search and retrieval operations almost on a daily basis since November 2020. We are present at the retrieval and handover of human remains, but also provide technical support to the process of identification of these remains so that they can be handed over to their families. This process is not over yet. It’s also important to support the families of those missing, including with psychological support if necessary, or economic support if possible. We understand that the identification issue is important also from the perspective of legal framework. We are ready to assist the Armenian authorities in improving the legal framework, which will contribute to these families’ benefitting from relevant services and assistance.

-I think firstly we have to realize that in the course of the conflict all the sides are affected, especially the civilian population. There are people who went missing on the sides as they didn’t return from the battlefield. Initially, we were very much in an emergency mode in connection with our humanitarian response to the escalation, including during the active hostilities,. And now we are moving towards a more sustainable response, also in terms of livelihoods, food security and other issues. We are looking at ways of developing such schemes so that affected people can recover their dignity and restart their life wherever they are.

- Have there been visits to the prisoners of war after the end of the war? What problems did the ICRC staffers record after visiting the Armenian prisoners of war in Azerbaijan? What are their detention conditions? Can you release their total number based on the facts you have?

-We certainly do much more than we can communicate publicly. It’s a very sensitive issue. As a matter of principle, the ICRC engages in a discrete conversation with the relevant authorities when dealing with such issues. This is a normal practice for the ICRC, and as we visit the places of detention across the world, we communicate of that part of work in a very modest way. Across the region the ICRC has been visiting detainees for decades, and this has not stopped during and after the recent escalation of the conflict, either. We continue visiting the conflict-related Armenian detainees in Azerbaijan and engage with the authorities on a variety of dimensions. This way, we act as a neutral intermediary. We facilitate the exchange of family news between the detainees and their families. Now many things are said about their numbers and the conditions of detention, but it would not be appropriate for the ICRC to comment on this, this is the part of the bilateral dialogue we have in full discretion with the relevant authorities. We are visiting those detained, assessing their treatment and conditions of detention, and making sure they can communicate with their families. For family members, who do not know where their loved ones are, to receive a Red Cross message, a call or an oral message through the ICRC saying that their beloved are okay has an incredible value.

-Azerbaijan’s President repeatedly announces that Azerbaijan has returned all Armenian POWs. He claims that the other Armenians who are currently detained in Azerbaijan have another status and are accused of crimes. According to the ICRC, what is the status of detained Armenians in Azerbaijan?

-As the ICRC, we do not enter a public discussion on the status of detained people. Both Armenia and Azerbaijan have expressed their positions. We certainly have our own view which we keep for our bilateral and confidential dialogue with the authorities. The status determination is something that indeed does matter, and the issue is also highly sensitive. There has been a certain number of detainees who have been returned from Armenia and Azerbaijan. The ICRC has not been involved in the actual release, with the recent exception of a lady who was returned to Lebanon. It was organized at the respective levels under the auspices of Russia.

We also visit the detainees once they are back home to assess their situation and see how and if we can provide support to them and their families.

-Since the establishment of the ceasefire on November 9, search operations for the bodies of the dead are underway in the battle zones. Azerbaijan sometimes is delaying these operations for unknown reasons for several days or a week, thus obstructing the process of finding the bodies. Isn’t this a violation of humanitarian obligations in case when the specialists note that the later the bodies are found, the harder their identification will be?

-You are perfectly right, the later the human remains are found, the harder the identification will be. We have to consider conditions in which these operations are taking place. The operations started almost immediately after the signing of the ceasefire. They have not really been discontinued, though  sometimes they stopped for several days. We are talking about searching for human remains at the former battlefields that are heavily polluted with unexploded weapons, so it’s an extremely dangerous environment. The territory is very large as well. There is also the issue of information on where to search. At the initial phases it was probably easier, but now as the time passes, it gets more complicated to identify search areas. Now these operations sometimes lead to little success as the teams that go on the search mission may not find any human remains during the day.

We need to take everything into account – the conditions, the need for exchange of information and cooperation between the sides and with the Russian peacekeepers. It may seem very simple, and I understand the families who are so anxious about the news about their loved ones. However, we also have to understand the complexity of such operations. I think there have been delays in these operations also for some logistical reasons, sometimes the weather conditions did not allow the search operations to go on as planned. On the ICRC side, we involve our forensic and other specialists in these operations, such as demining experts, who advise the teams on the ground how to properly and safely retrieve and evacuate the human remains.

-During the 2020 Nagorno Karabakh War many videos were posted on private Telegram accounts and groups showing Azerbaijani military servicemen humiliating, executing and committing other acts of inhumane treatment against numerous Armenian prisoners of war, including both servicemen and civilians. This is a clear violation of the third Geneva Convention which states that “prisoners of war must at all times be humanely treated…Measures of reprisal against prisoners of war are prohibited.” In your opinion, how should the international community and human rights organizations react to this kind of conduct of the Azerbaijani military?

-I would let the human rights organizations and the international community decide what they want to do on that. As the ICRC we did follow the conduct of hostilities by the sides. And this is the topic that we discuss, again bilaterally and confidentially, with the respective authorities. One of the roles of the ICRC is to promote the respect for international humanitarian law. We had this kind of discussions with the authorities in the region for almost three decades. The recent escalation of the conflict will feed our further dialogue with them. As we promote the implementation of the international humanitarian law on the national level, we also promote the principles of justice. However, to preserve our capacity as a neutral and impartial humanitarian organization to operate in all the sensitive environments we work in across the globe, we do not contribute to any judicial processes or public reporting. It is not our role while it is certainly the role of other entities. If we were to do that, the consequences would be immediate, and we would lose our access to the affected people.