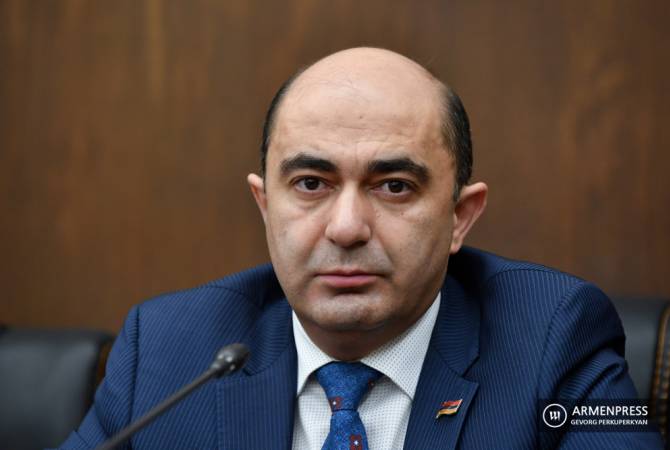 
YEREVAN, MARCH 22, ARMENPRESS. The opposition Bright Armenia (LHK) party’s leader, MP Edmon Marukyan says that if the ruling My Step bloc were to pass a new electoral code before the expected early elections then the agreements reached between his party and the government would be considered “tossed out.”

“We’ve said that even if the [electoral] code were to be changed our decision on participating in the elections won’t change because there is no alternative to elections, we will participate in them. But you can’t change the rules of gameplay during the game,” Marukyan said in a live Facebook video hours after the justice minister spoke about the issue.

Marukyan stated that the electoral code bill is “completely raw”, and said that his party is recommending not to hold the early polls with it.

“You can’t change the rules of the game after announcing the election day. Adopting new rules of gameplay means questioning the date of the election, therefore deepening the crisis in the country,” he said.

Speaking about a full proportional electoral system without preferential voting , Marukyan said that this means that party leaders or boards of parties that will be elected to parliament would eventually appoint Members of Parliament. “Therefore, the people will elect a party, for its leader, but lawmakers will be elected whom the people didn’t elect,” he said.

The LHK had recommended the elections to be held under the proportional system but with open lists, but this proposal was turned down. “We had suggested a better system, which wasn’t accepted. If they’d want to adopt it now, elections can’t be held on June 20,” Marukyan added.

Marukyan argues that the current electoral code shouldn’t be amended. “If an electoral code is brought, and the My Step bloc were to unanimously adopt it, this would mean that all current agreements with us are getting tossed out, because we had agreed that we are going for elections on June 20, and we aren’t interfering in anything. The legitimacy of the expected elections will be doubted with this,” the LHK leader said.