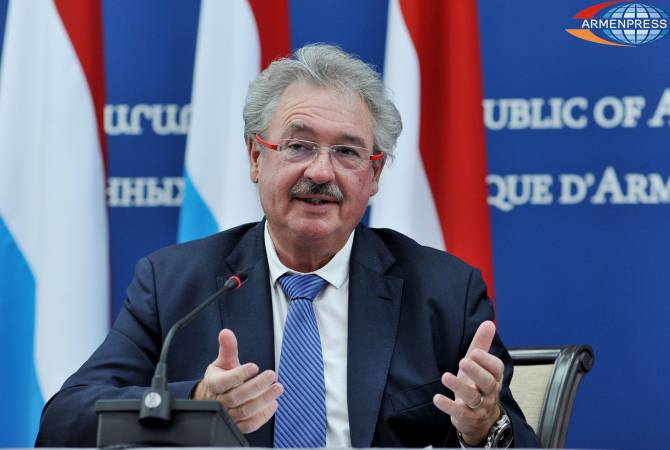 
YEREVAN, MARCH 19, ARMENPRESS. Foreign Minister of Luxembourg Jean Asselborn commented on the questions of the head of the Alternative Democratic Reforms (ADR) faction of the Parliament relating to the current uncertainty around the future of Nagorno Karabakh after the ceasefire.

Armenpress presents the FM’s responses to the questions:

Question: “What is the European Union’s approach to the legal status of Artsakh (Nagorno Karabakh) from the perspective of international public law? The final recognition? What do you think?

Answer: EU hopes the sides will manage to find a lasting solution through negotiations which will define the legal status of Nagorno Karabakh with the consent of all parties. In this sense, EU supports the efforts of the OSCE Minsk Group Co-Chairmanship, the OSCE Chairperson-in-Office and her Personal Representative.

Question: How does Luxembourg assess the approaches of Armenia and Azerbaijan over the requirements of N2357 resolution of the PACE adopted on January 25? Does the government think that the sides have implemented all the provisions of the resolution, if not, where does Luxembourg see difference in approaches in particular in the following formulations of the resolution: “to refuse from statements escalating the situation which can block the political dialogue, ensure the implementation of the humanitarian obligations assumed by the trilateral statement, such as the return of all prisoners of war and other detained persons, the bodies of the dead, the preservation of cultural heritage”?

Answer: The exchange of POWs is one of the points of the ceasefire statement which is the most problematic till now. Armenia has returned all detained persons, however, a lot of Armenian POWs are still held captive in Azerbaijan. The aggressive rhetoric between the two countries, which is especially being constantly inflamed by the Azerbaijani President, complicates the constructive cooperation. The preservation of cultural heritage of the region also remains one of the contentious issues for the sides.

Question: In the past Azerbaijan has criticized the EU and its member states for many times. On January 31 the foreign ministry of that country issued a statement, calling EU’s approaches as one-sided and based on double standards, which, it said, could damage the relations with Azerbaijan. Moreover, on December 24 Ilham Aliyev called French, Belgian and Dutch politicians as hypocrites, calling on them to open their eyes and look at the reality. What was the impact of these statements on the Luxembourg-Azerbaijan relations? Given these realities and the meeting of the EU-Azerbaijan Cooperation Council on December 18 last year, to what extent is it appropriate to have such cooperation with Azerbaijan, also within the Eastern Partnership?

Answer: Azerbaijan is a participant of the EU’s Neighborhood Policy and Eastern Partnership, which allows the EU and its member states to engage not only in the constructive, but also criticizing dialogue with Azerbaijan. In this way EU can become an important role-player in the context of respecting the international law and human rights by the Azerbaijani authorities.

Question: On November 19, 2020, the EU High Representative for Foreign Affairs and Security Policy made a statement over the situation in Nagorno Karabakh. Since this statement did the Luxembourg government see concrete developments in the region in terms of EU’s calls. If not, what problems still exist and who is responsible for them?

Answer: The ceasefire regime is being observed up to now since the November 10 statement, with exceptions to some incidents, however, the aggressive rhetoric has not been eliminated, and the issue of the exchange of POWs is in the deadlock. There is also no investigation of the military crimes, the humanitarian situation in Nagorno Karabakh remains tense, the entry of international organizations to the region is blocked by Azerbaijan, there are still no signs for the lasting solution to the conflict.

Question: Is the EU going to provide assistance to the population of the region aimed at preventing the humanitarian disaster in Artsakh?

Answer: The EU has provided humanitarian support to the region since the crisis days which comprised 6.9 million Euros.

Question: Did the situation in Nagorno Karabakh and the aggressive rhetoric of the Azerbaijani authorities towards the EU have an impact on the European visa policy towards that country, especially for the Azerbaijani diplomatic passport holders?

Answer: The visa policy is regulated by the visa facilitation and readmission agreements signed with Azerbaijan in 2014, and nothing has changed in this respect.

Question: Does Luxembourg support the possibility of deploying observers by the OSCE in Nagorno Karabakh? Can the OSCE play a role in the process of investigating the military crimes in the region?

Answer: The deployment of OSCE observer mission is possible in case of receiving such a request with the consent of all sides. Luxembourg supports that proposal and the OSCE efforts. The OSCE’s function is to prevent and solve conflicts. It has no tool to deal with the investigation of military crimes.