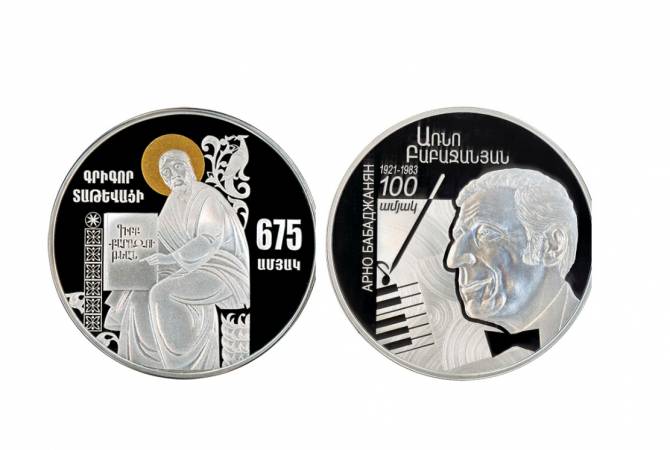 Babajanyan graduated from the Yerevan and the Moscow Conservatories. In 1950-1956 he taught at the Yerevan Conservatory. A celebrated piano virtuoso, Babajanyan was known for performing his own works. A. Khachatryan and S. Rachmaninoff had an influence on formation of Babajanyan’s creative style, which was mostly expressed in his early works: the piano concert (1944) and the violin concert (1949). The works “Vagharshapat Dance”, “Prelude” and “Impromptu” won the first prize at the 1st World Youth and Student Festival in Prague in 1947. The composer’s creative personality was obviously shown in the “Heroic Ballad” (1950) written for the piano and orchestra (USSR State Prize, 1951), then in the piano trio (1952).

Babajanyan composed in different styles - classical, pop, jazz. He was one of the prominent masters of song in the Soviet era. He wrote many lyrical songs, music for dramatic performances (W. Saroyan’s “My heart’s in the highlands”) and movies (“The first love song”, co-author Gh. Saryan, “On the path of thunder”, “The mechanics of happiness”).

As one of much-loved composers of the Soviet people, Babajanyan holds a special place in the history of Armenian and Soviet music thanks to his unique natural talent, deep sensitivity and musical expression.

Obverse: a wedding couple, a treble clef, as well as a stylized rose and vinyl.

The coin is minted in the Lithuanian Mint.

Tatevatsi studied in the theological seminary of the monastery of Tatev, was mentored by a great theologian-philosopher Hovhan Vorotnetsi, after whose death he headed the higher clerical schools of Tatev and Aprakounis and taught theology, philosophy, grammar, music theory and other subjects. He also lectured at the clerical schools of Metsopavank and Saghmosavankchurches. In the meanwhile, he was dealing with national-ecclesiastical issues, confronting the Catholic preachers, i.e. unitarians, in his struggle to back the orthodox persuasions and independence of the Armenian Church.

Settled in Tatev in 1390, Tatevatsi brought around him people who came from Syunik and different parts of Armenia to study. He presented his pedagogical views in the work “Constitution of Education”, which was phenomenalto the medieval Armenian pedagogical literature. Under Tatevatsi’s governance the theological seminary of the monastery of Tatev became a university, reaching its peak of prosperity, turning into a center of science, culture, art, and spiritual life.

Tatevatsi wrote valuable theological, denominational and philosophical works. Most important of them are “The Book of Inquiries” and “Voskeporiq” encyclopedic works, which bring together the centuries-old achievements of the Armenian denominational thought, as well as “The Winter Volume” and “The Summer Volume” predicant books.

Tatevatsirewrote and illustrated the Gospels, which are kept in the Mother See of Holy Etchmiadzin and Matenadaran named after Mesrop Mashtots.

The Armenian Apostolic Saint Church has ordained Grigor Tatevatsi a saint, and commemorates him on the Saturday before the fourth Sunday of Lent.

Reverse: the bas-relief of Tatevatsi on the wall of the Armenian Church of the Holy Transfiguration of the Armenian Diocese in New Nakhijevan and Russia (architect: Artak Ghulyan) in Moscow.

The coin is minted in the Lithuanian Mint.

Collector coins are made of precious metals and are issued to present to the society the national, international, historical and cultural, spiritual and other values of the country, to immortalize these values in the metal and to meet the demands of the numismatic market.

Like any other currency the collector coins have face value which makes them the means of payment. However, the face value of these coins is much lower that their cost price which includes the cost of the precious metal used for manufacturing of the coin, mintage and other expenses. Low face value and high cost price allow these coins to be considered as the items of collection and not the means of payment used in money circulation. The collector coins have also the sale price set by the Central Bank of Armenia.

As the items of collection the collector coins are issued in very restricted quantities and are not reissued.

Numismatists, collectors and all interested persons can buy the Armenian collector coins in the sales salon “Numismatist” which is in the building of the Central Bank of Armenia and is open for everyone.