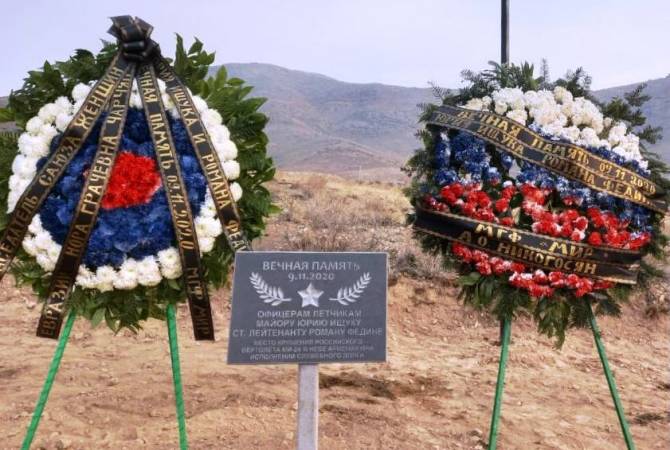 
YEREVAN, DECEMBER 12, ARMENPRESS. A memorial plaque in memory of the victims of the Russian helicopter shot down by Azerbaijan in the airspace of Armenia has been inaugurated in Yeraskh village of Armenia’s Ararat province.

The memorial plague has been installed by the Peace Foundation.

“Thousands of Armenian soldiers were joined also by Russian officers who were in the airspace of Armenia with their mission on November 9. I want to condemn this terrorist act of Azerbaijan during which the helicopter of the Russian peacekeepers was shot down in the territory of Armenia”, head of the opposition Bright Armenia faction of the Armenian Parliament Edmon Marukyan said during the inauguration of the memorial plaque.

Later a monument will be erected in the place where the helicopter was shot down.

A Russian Mi-24 military helicopter was shot down over Armenia near the border with Azerbaijan on November 9. Two crewmembers died and the third pilot was wounded. Azerbaijan’s Foreign Ministry admitted that the helicopter had been shot down by the Azeri armed forces by mistake and stated Baku was ready to pay compensation to Moscow over the incident.