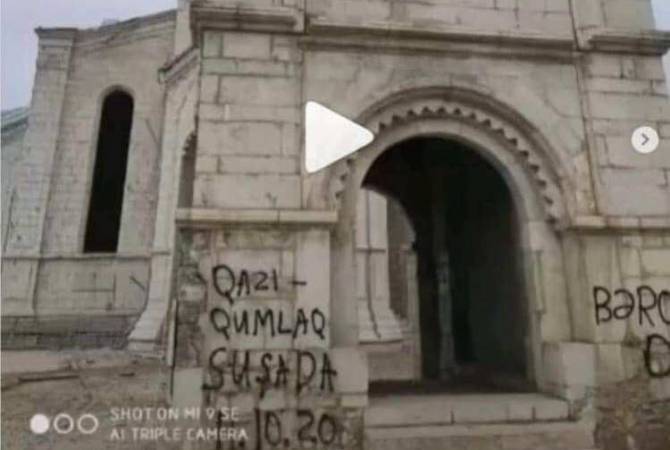 
YEREVAN, NOVEMBER 14, ARMENPRESS. The Mother See of Holy Etchmiadzin (Armenian Church) issued a statement, strongly condemning the vandalization of Holy Savior Cathedral of Ghazanchetsots in Shushi city of Artsakh by Azerbaijanis, ARMENPRESS was informed from the press service of the Mother See.

''We learned with sorrow that following the joint declaration on ceasefire signed between the Armenian, Russian and Azerbaijani leaders overnight November 10, the Azerbaijanis who entered Artsakh's Shushi city vandalized Holy Savior Cathedral of Ghazanchetsots, leaving their trace on the external and internal walls of the Cathedral.

We strongly condemn the incident, assessing it as an overt act of vandalism and intolerance. Azerbaijan should not be allowed to continue its policy of cultural genocide with Turkish support, which for decades has been carried out in Azerbaijan and Nakhichevan Autonomous Republic of Azerbaijan.

At the same time we call on the international community and the inter-religious and inter-church organizations to voice about that and take appropriate steps to stop such barbaric acts by Azerbaijani authorities in Artsakh against religious-cultural monuments and demonstrations of anti-Armenian moods’', reads the statement.