Armenia denies Aliyev's announcements about casualties of the Armenian side 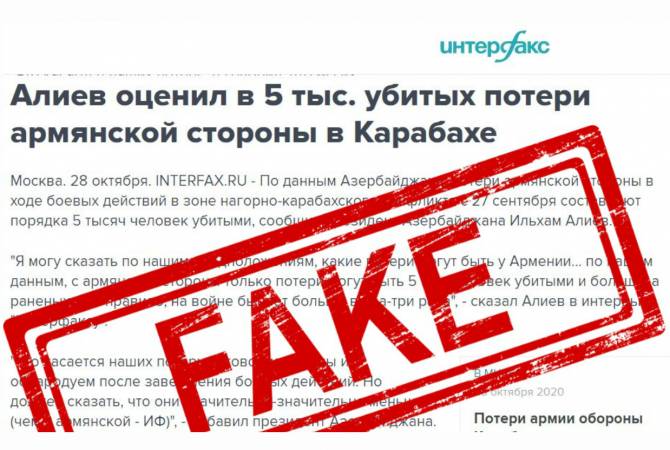 
YEREVAN, OCTOBER 28, ARMENPRESS.  The ''assumptions'' of the Azerbaijani president Ilham Aliyev about the casualties of the Armenian and Azerbaijani sides have nothing to do with the reality, ARMENPRESS reports the information verification center examined the false claims of Aliyev in his interview with Interfax.

''In an interview with the Russian Interfax Azerbaijani president Ilham Aliyev announced that according to their assumptions the Armenian side has suffered over 5 thousand casualties since the start of the war, October 27. Speaking about the losses of the Azerbaijani army, he emphasized that the casualties of the Armenian army is much higher.

We announce that the ''assumptions'' of the Azerbaijani president have nothing to do with the reality. In contrast to the Azerbaijani government, which does not disclose its military losses saying that it's a ''military secret'', the Armenian side informs about its losses nearly on daily basis. At the moment the number of our servicemen killed in action is 1065'', the information verification center said.

The claim that the losses of the Azerbaijani army is less than that of the Armenian side, also does not correspond to the reality.