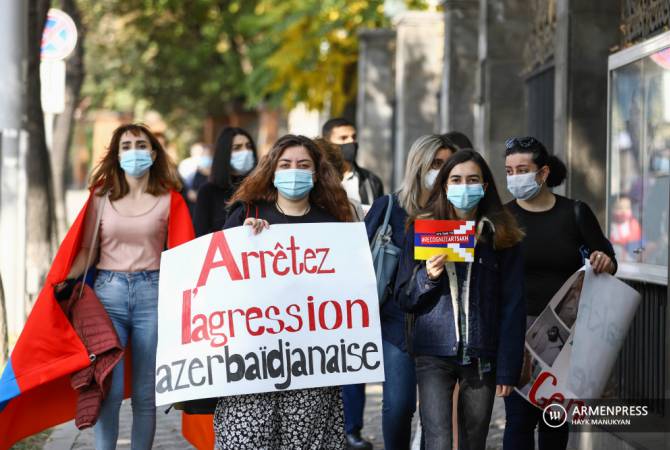 
YEREVAN, OCTOBER 20, ARMENPRESS. After meeting with EU Ambassador to Armenia Andrea Wiktorin, a group of Armenian citizens have an impression that the Ambassador’s position on the Artsakh issue is pro-Armenian.

Three citizens met today with the EU Ambassador, requesting to give a clear assessment on the ongoing Turkey-back Azerbaijani aggression against Armenia and Artsakh.

“The responses were quite clear, despite some disagreements over concepts. We stated that the EU, all European structures today are running the same policy of silence as they did during the 2016 April Four-Day War”, one of the activists Armine Melkonyan told reporters after the meeting.

The citizens have shown pictures showing the actions of the Azerbaijani side against the Armenian prisoners of war and victims. The EU Ambassador said she knows everything in detail and added that they have also presented all these to Brussels. She expressed hope that an assessment will be made.

“She expressed her sympathy to Armenians. All know in Europe that Azerbaijan has started the war with the support of Turkey. The Ambassador’s position was pro-Armenian, it was visible”, Melkonyan said.

The EU Ambassador also expressed her regret over the bombardment of St. Ghazanchetsots Cathedral in Artsakh’s Shushi, as well as over the destructions of cultural values.

The Ambassador stated that what depends on them now is just to present all of this to Brussels and hope that the EU states will make a fair assessment.