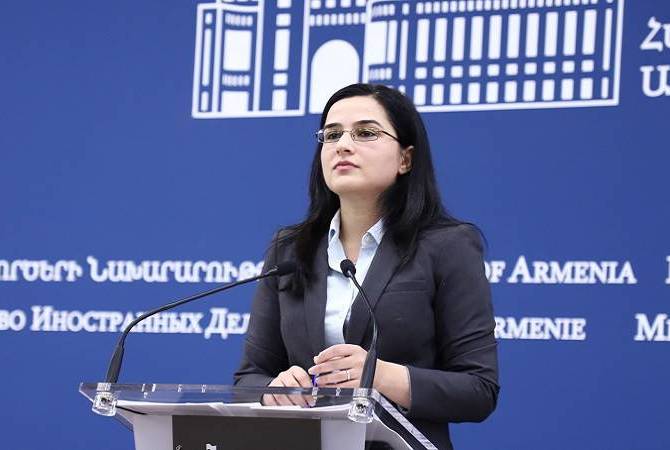 “For three weeks now, Azerbaijan has been violently shelling the cities and villages of Artsakh (Nagorno Karabakh), including its capital Stepanakert, deliberately targeting civilian population and civilian infrastructures, killing dozens of peaceful citizens and forcing them to leave their homeland. In addition to this, Azerbaijan has already targeted and inflicted casualties on the civilian population and infrastructures in the territory of the Republic of Armenia. The current large-scale aggression was preceded by Azerbaijani provocative disinformation and smearing campaigns, just like the most recent one, the so-called “Armenian strikes on Ganja.”

For decades, Azerbaijan has been infusing its population with hatred and Armenophobia, the gravest expression of which can be found in the footages of humiliating, torturing and subsequent brutal killings of Artsakhi prisoners of war, proudly showcased in Azerbaijani social media.

While disseminating unfounded allegations, Azerbaijan continues to refuse to maintain ceasefires mediated by the leaders of the OSCE Minsk Group Co-Chairing countries and categorically rejects any possibility of ceasefire verification mechanisms in order to continue the war.

The European Union has, to date, failed to clearly and explicitly react to these ultimate manifestations of war crimes committed by Azerbaijan with direct involvement of Turkey including through transfer of foreign terrorist fighters from Syria and Libya, and disregarded the existential threat and grave violations of the right to life of Artsakhi people, as well as the severe humanitarian crisis evolving in Artsakh.