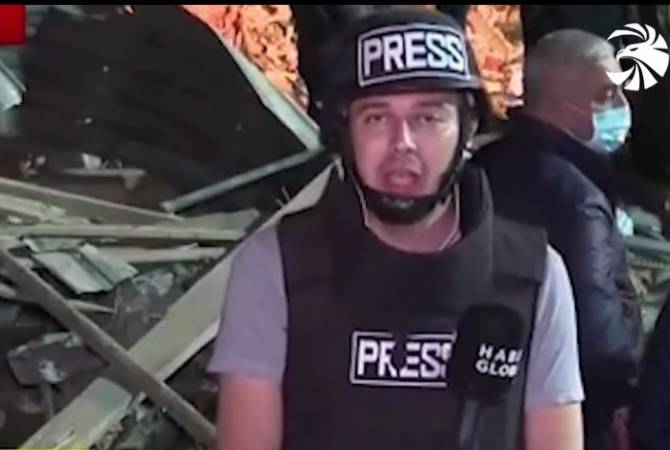 
YEREVAN, OCTOBER 17, ARMENPRESS. The Azerbaijani fabricated reports alleging that the Armenian side has delivered a missile strike on civilian facilities in Azerbaijan’s second city of Ganja are yet another fake news in the barrage of the Azeri disinformation campaign which seeks to mislead the international community at all cost, the Armenian Defense Ministry’s official news outlet Zinuzh Media reported in a video debunking the accusations.

“A powerful explosion occurred at midnight in Ganja, the second largest city of Azerbaijan, followed by such a cycle of developments, seasoned with fabrications and obvious lies, which once again overtly shows that Baku is capable of anything to ensure its desirable propaganda background, even at the cost of their own citizens’ lives. Immediately after the explosion the Azeri TV channels were on the scene providing live coverage of the rescue operations – whereas even if hypothetically this were to be a missile strike no one could’ve ruled out a potential second strike. Meaning, if that really was a strike, the local authorities ought to at least tried to beware from the possible second or third strike and evacuate the civilians. But for some reason they were more than sure that no more so-called strikes would happen. The Azeri presidential assistance was equally quick to claim that the so called strike was fired from Armenia with a SCUD missile, with absolutely no evidence whatsoever. And this was happening only minutes after the explosion, whereas identifying the type of any missile strike requires rather long analysis.

Bizarrely enough, the same propaganda machine began circulating a video allegedly showing what they described as Armenian forces carrying out rocket strikes at Ganja from a GRAD system, presenting it to be the cause of the blast. But Baku is extremely untalented in propaganda, and this particular case was no exception. Only one explosion took place in Ganja, whereas the video showing the alleged GRAD shooting shows at least 30 rockets being fired. How could only one explosion happen from several dozens of fired rockets? Perhaps this is only possible in the Azeri propaganda tales. Moreover, in order for a GRAD multiple rocket launcher to be able to hit Ganja the system should’ve been positioned no farther than 20km from the city, such as the city’s suburbs, which in turn would hypothetically mean that the Armenian forces have virtually entered Ganja.

Minutes after the blast, Azerbaijan started circulating a shocking picture of a dead child, alleging that the child was killed in the blast. Even the most superficial study of the image proved that it was fabricated as well: the photo depicting the child was taken 4 years ago in Syria. The most shocking claim was the completely baseless accusation that the strike was carried out from Armenia, without any evidence."

Armenia has numerously officially announced that “not a single missile, shell or even bullet” was fired from the territory of Armenia at the direction of Azerbaijan.

21:29, 09.24.2021
Viewed 2283 times Today, no Armenian lives or practically could live in the territories under the control of Azerbaijan – Pashinyan