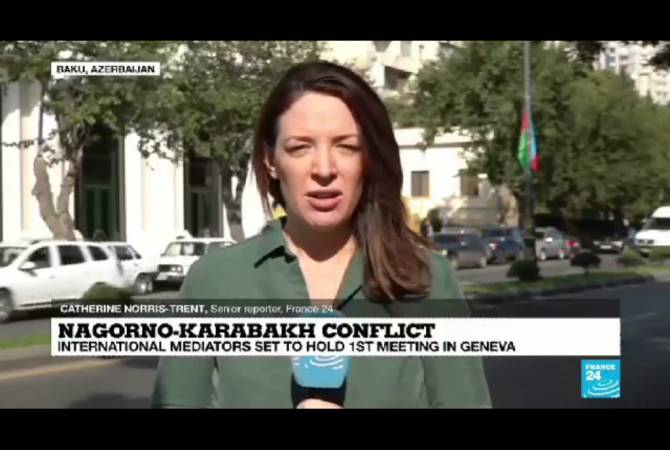 
YEREVAN, OCTOBER 12, ARMENPRESS. The Azerbaijani leadership is constantly monitoring Katherine Norris-Trent, a journalist of France24 TV, who traveled to Baku to cover the Artsakh conflict, ARMENPRESS reports she said during a Live broadcast.

Katherine Norris-Trent said that the Azerbaijani government constantly monitors their movement and violates their right to cover the developments. She added that someone accompanies them and immediately intervenes whenever they want to just talk with the citizens.

The Azerbaijani armed forces target journalists also in Artsakh. On October 1 two reporters of French Le-Monde were injured by a bombing. One of them was in critical situation but the doctors of Artsakh were able to save his life. Later they bombed Ghazanchetsots Church in Shushi town of ARtsakh from a high precision weapon. When reporters arrived at the scene to cover it, they bombed again and injured 3 Russian reporters, one of them is still in critical situation. Azerbaijan has also filed a criminal case against another Russian reporter WarGonzo’s Semen Pegov.