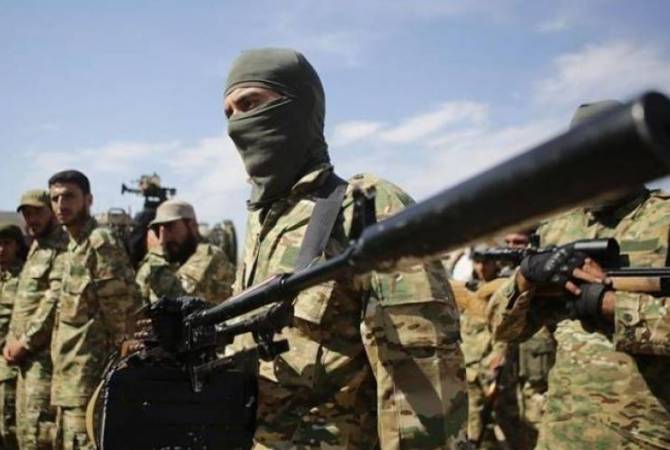 
STEPANAKERT, OCTOBER 12, ARMENPRESS. The audio recording of radio communications between two Syrian mercenaries brought from Turkey to fight from the Azerbaijani side against Artsakh has surfaced online, shedding light on the current situation in the Azeri military and the growing discontent even among these mercenaries.

The two mercenaries, who identify themselves as Abu Ismail and Abu Hassan, are heard telling each other about the fighting.

“Honest to God, our squad is gone, and now they [Azeris] are forcing us to advance again,” one tells the other, mentioning that they have many victims and that the Azeri military is using them as a human shield.

They start complaining that the Azeri military is not giving them food and not allowing them to go home and instead they are kept at the heated battle sections so that they get killed and the Azeris don’t have to pay them. One of them also says that the Azerbaijani army is standing behind them.

“Sometimes these Azeris don’t feed us, many of our guys have been wounded, these [expletive deleted] don’t send them back and dump them to die so that they wouldn’t pay them,” one of the mercenaries says. “Listen, we also haven’t been paid at all. They want us to take pictures of dead Armenians in order to pay us,” the other replies.  The dead bodies of the mercenaries are shipped to Turkey, he said.

“Are we near Iran now?” the disoriented mercenary asks at one point.

One of these mercenaries says he was “astonished” to learn that the Azerbaijani military snipers have shot dead their own troops who attempted to surrender.

“Honest to God, we have all [expletive deleted] regretted coming here,” he says, mentioning that the Azeri troops are “drunk all day.”