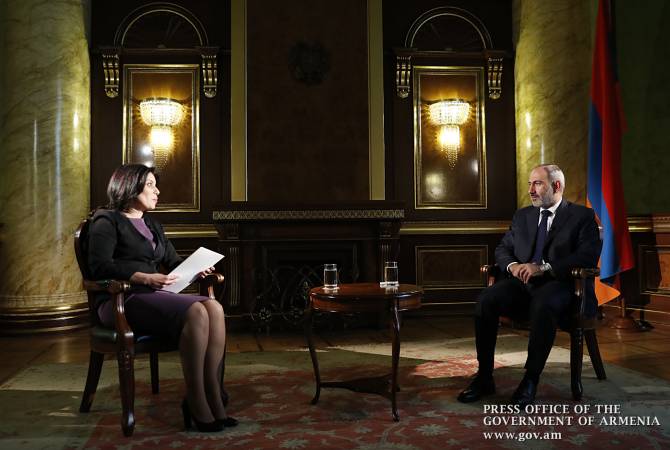 
YEREVAN, OCTOBER 10, ARMENPRESS. Prime Minister of Armenia NIkol Pashinyan gave an interview to German ZDF TV, expressing conviction that the international recognition of Nagorno Karabakh’s status can become a way out of this situation, when the people of Artsakh (Nagorno Karabakh) are facing the threat of genocide.

Reminding about the Armenian Genocide committed by Ottoman Turkey that took place 100 years ago, during which 1.5 million Armenians were killed, Pashinyan said that the leadership of the Ottoman Turkey was able to get rid of the Armenian population in the Western Armenia. “By the way, I think that Turkey returned to the region 100 years later not only for emotional revenge or as a result of hatred against Armenians, but because the Armenians of the South Caucasus are the last obstacle for them to continue their expansion to north, east and south-east’’, Pashinyan said, emphasizing that it’s an attempt to subject Nagorno Karabakh to ethnic cleansing, noting that the terrorists brought from Syria to the region by Turkey play an important role in that plan.

Referring to the possibility of concessions, PM Pashinyan said that compromise is possible when both sides are ready to that. ‘’Azerbaijan is not ready’’, he said, adding that Armenia welcomed the call of the OSCE Minsk Group Co-chair countries to cease military operations, but Azerbaijan gave no reaction to those statements.  ‘’Moreover, Turkey announces that it hopes Azerbaijan will not stop military operations, after which Azerbaijan announces that it will stop military operations only after the so-called capitulation of Nagorno Karabakh. And yes, the recognition of the status of Nagorno Karabakh can become a way out of this situation’’, Pashinyan emphasized.