Armenian-Americans block traffic on freeway in Hollywood, protest outside CNN building in LA 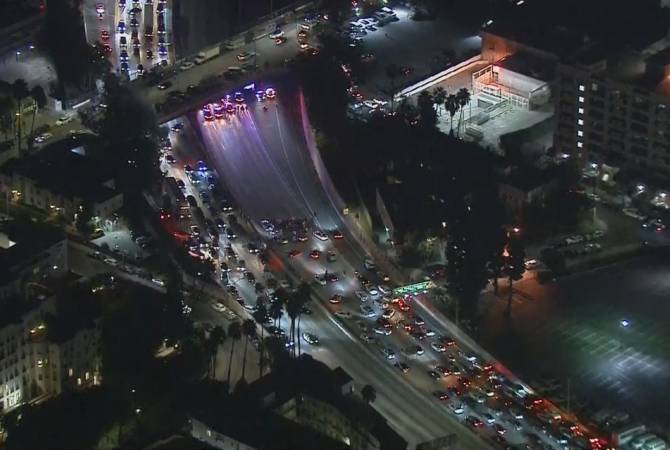 
YEREVAN, OCTOBER 4, ARMENPRESS. Armenians in the United States are holding protest in Hollywood against the ongoing aggression of Azerbaijan and Turkey on Armenia and Artsakh.

The Armenian-Americans blocked the traffic on both sides of the 101 Freeway in Hollywood as sign of protest.

The demonstrators were holding the Armenian flag and kept the freeway blocked for about an hour, according to CBCLA.

Hundreds of Armenians again mobilized outside the CNN building in Los Angeles, urging the media outlet not to stay silent over the ongoing aggression of Azerbaijan and Turkey. They are holding posters “Where are you CNN?”, expressing their surprise on the media outlet’s silence. The representatives of Yazidi people have also joined Armenians.

Azerbaijan launched an attack on Artsakh on September 27 with the support of Turkey, targeting also the civilian settlements, including the capital Stepanakert. Civilians were killed in Artsakh as a result of the Azerbaijani offensive.

Fierce battles took place between the Azerbaijani and Artsakh sides, with both suffering huge losses both in the manpower and the military equipment. But the losses of the Azerbaijani side are much more than that of the Artsakh side. The Azerbaijani armed forces have also targeted Armenia’s military and civilian infrastructures. There is evidence that Turkey is directly engaged in Azerbaijan’s offensive, in particular it transported mercenaries from Syria for using them against Artsakh.