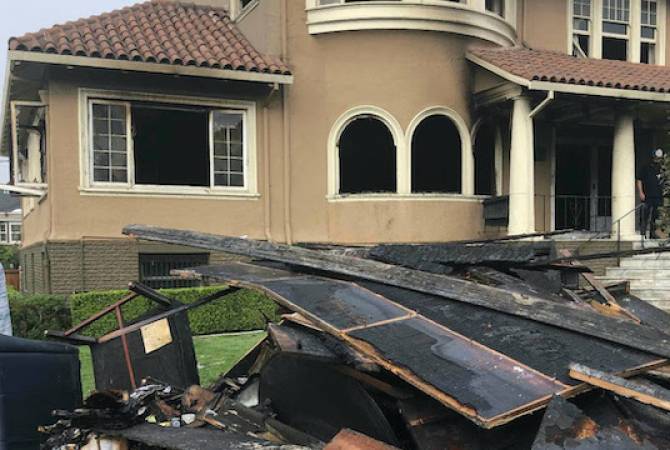 
YEREVAN, SEPTEMBER 18, ARMENPRESS. Lawmaker Mkhitar Hayrapetyan from the ruling My Step bloc condemned the arson attack targeting the St. Gregory Armenian Apostolic Church of San Francisco during his speech in parliament on September 18.

“On behalf of our parliament, I would like to strongly condemn all hate crimes with ethnic or religious motives, hoping that very soon the local law enforcement and authorities will make sufficient efforts in apprehending and bringing to account the criminals,” Hayrapetyan , the Chair of the Parliamentary Committee on Science, Education, Culture, Diaspora, Youth and Sport said.

He said that although the suspects haven’t yet been apprehended, it’s not difficult to guess who could’ve committed the crime, hinting that the arson was done with pro-Azerbaijani motives given the earlier attack on an Armenian Church again in San Francisco earlier in July when anti-Armenian and pro-Azerbaijani graffiti was sprayed on the church walls, and the vandalisms committed against Armenian monuments elsewhere, notably the Komitas statue in Paris, France – incidents which started happening after the Azerbaijani military attack on Armenia in July, which was subsequently crushed by strong countermeasures.

“We are a civilized nation, and vandalisms against schools, churches or monuments are unfathomable for us, but bearing in mind who stand behind these acts – some of our neighboring countries from the East and West, we don’t understand these actions but at the same time we are no longer surprised.”

Speaker of Parliament Ararat Mirzoyan stressed that surely all lawmakers are joining the stance.

The Board of Trustees of the St. Gregory Armenian Apostolic Church of San Francisco announced on Thursday that around 4 a.m. the building adjacent to the church was set ablaze by arsonists, Asbarez reported.

“The building housed Vasbouragan Hall, as well as offices for St. Gregory Armenian Church and various organizations. The San Francisco Fire Department responded immediately, however, the building has suffered a great loss,” said the church board of trustees.

This is the second attack on an Armenian establishment in San Francisco in the past two month: In July, the Krouzian-Zekarian Vasbouragan Armenian School and the adjacent community center were targeted by vandals. The exterior of the building was spray painted with anti-Armenian, pro-Azerbaijani graffiti. Investigators have classified the vandalism as a hate crime and the suspects in that case remain at large, police said.

“The Church Board of Trustees and community leaders are on site assessing the damage and working closely with San Francisco Fire and Police Departments in their investigation. We will provide more updates to the community as they become available,” added the board.

Although firefighters were able to eventually extinguish the fire, the building sustained extensive damage, according to San Francisco Fire Department spokesman Lt. Jonathan Baxter. No one was injured as a result of the fire, he said.