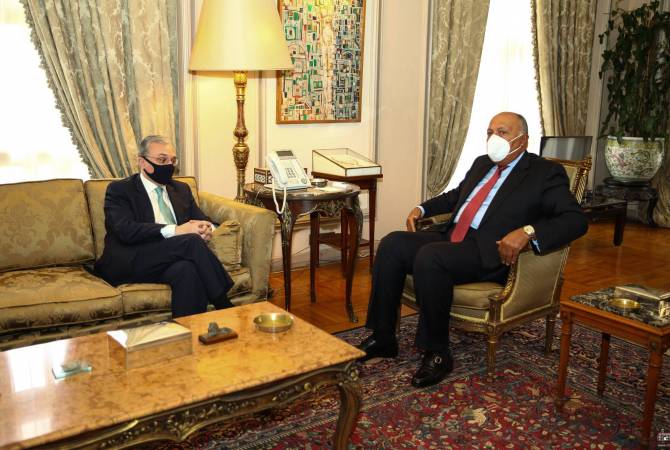 
YEREVAN, SEPTEMBER 14, ARMENPRESS. Armenian Foreign Minister Zohrab Mnatsakanyan says that Turkey’s actions in the Caucasus undermine the effort toward peace and stability in the region.

Speaking at a joint press conference with Foreign Minister of Egypt Sameh Shoukry in Cairo in response to Sky News Arabia’s question, the Armenian FM said that during the Azerbaijani attack on Armenia in July 2020 Turkey was the only country that was taking a one-sided, very aggressive approach.

Sky News Arabia: You have spoken about the depth of Armenian-Egyptian relations and the historical and future role of Egypt for Armenia conditioned by the investment of Armenians and the presence of the Armenian community. But there is still tension between Armenia and Azerbaijan. How do you assess the behavior of Turkey in the Caucasus and Eastern Mediterranean? Does this behaviour pose a danger or not?

Zohrab Mnatsakanyan: Thank you very much for the question. So far as the Nagorno-Karabakh conflict is concerned, we have been and remain extremely focused on the most important existential issues of our compatriots - the Armenians in Nagorno-Karabakh. Our focus and our ultimate priorities concern the sustainability of the very physical security of our compatriots in Nagorno-Karabakh and the question of status, the recognition of the right to self-determination and implementation of it without limitations. The security is in the heart of this very important priority for Armenia so far as the resolution is concerned. The OSCE Minsk Group Co-Chairmanship, which comprises France, Russia, and the USA, has been and remains the only important international platform, format within which we are seeking solution to this conflict. The conflict resolution can be based on compromise and compromise means that each of the parties has to take respective steps towards a balanced, measurable solution, which meets the interests of all.

It cannot be a “my way or no way” solution. Within this, I think we have the sensitivity of the international community towards this conflict. There is no such thing as bundling conflicts together and viewing them through one single prism. So far as Nagorno-Karabakh conflict is concerned, this conflict has its peculiarities, its history, its nuance, its important differences. Within this we value very much the very careful approach of all our partners towards the strictly peaceful resolution. There is no military solution to this.

We may insist on that because Armenia has all the capacity to defend itself, Nagorno-Karabakh has all the capacity to defend itself. There is only one guarantor of the security of our compatriots in Nagorno-Karabakh and that is only Armenia. We are resolute in this defence and it is with this confidence and understanding that we deny any attempts to military solution. So within this we have a good understanding of all our international partners, and we have the very careful, responsible approach of our international partners, in respect of the work of the OSCE Minsk Group Co-Chairmanship, and in respect of their endeavor for peace and stability in the region. Egypt in that sense is a very important partner for us.

Now Turkey. During the events in July, Turkey has been the only country that was taking a one-sided, very aggressive approach: one-sided in support of Azerbaijan, and aggressive approach toward Armenia and the Armenian people, in rhetoric at all levels and in action. Of course we see the military build-up that they are attempting. We are hearing about the use of the foreign terrorist fighters to be transferred to Azerbaijan or maybe they are already transferred. We see the heavy military presence, the build-up. These are exactly the moves which undermine the effort toward peace and stability in the region. We are resolute in our defense and we will also resolutely deny any such policies which project power, which are aggressive in their nature and which are of destabilizing nature. We see this power projection from Eastern Mediterranean to North Africa, to the Middle East and to the South Caucasus as well. So these are not welcomed policies at all.