Baku against freedom of the press; Italian journalist sounds the alarm on a known issue | ARMENPRESS Armenian News Agency

Baku against freedom of the press; Italian journalist sounds the alarm on a known issue 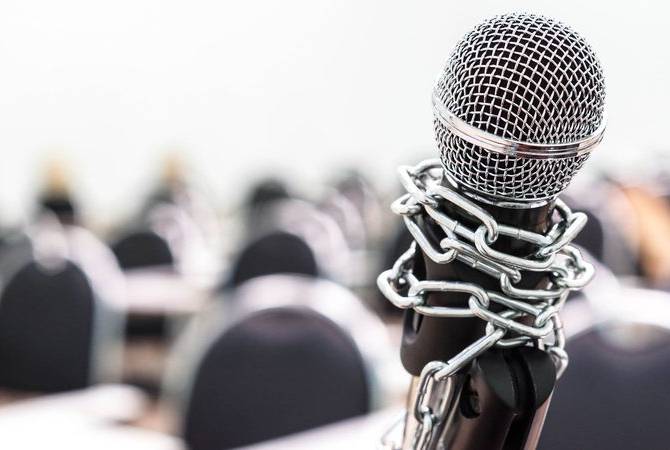 
YEREVAN, AUGUST 25, ARMENPRESS. During the recent border clashes between Armenia and Azerbaijan, Baku carried out a multi-pronged information war using both real and fake accounts. This included the spread of misinformation and various forms of threats against numerous Armenian and foreign social media users and activists.

Hate speech, disinformation and threats have always been an inevitable part of Azerbaijan’s agenda. Any attempt to present the reality objectively has consistently been rebuffed by Baku or by figures connected with Baku in one way or another.

The information war between the sides during the July skirmishes in Tavush region can also be considered as a ploy to disorientate both external and internal audiences, specifically as a cover for military failures. Traces of one of this type of articles when Azerbaijan tries to restrict freedom of speech outside of Azerbaijan’s borders both at the official level and in other ways, reveal the standard Azerbaijani scenario of repression of freedom of the press.

Italian researcher-journalist Simone Zoppellaro presented Azerbaijan as a state that can not boast any territorial conquest or military achievement, when analysing the Tavush/Tovuz border clashes, in an article published in EURACTIV  news portal.

In an article published in EURACTIV  news portal, Italian researcher-journalist Simone Zoppellaro presented Azerbaijan as “a state that can not boast any territorial conquest or military achievement” [translated].

Zoppellaro named Azerbaijan, “a country with rich resources and poor democracy”, where the Aliyev regime continues to voice threats to both Azerbaijani and foreign journalists who denounce corruption, violence, and obscenities. The author spotlights the Aliyev regime’s blackmailing, bribes and threats against media and activists, in order to lower the voices of those who speak up against the onslaught of corruption committed by its autocracy.

Azerbaijan's response to Zoppellaro’s article did not take long. Just three days later EURACTIV  published an article by another Italian researcher Daniel Pommier, who was claiming that Zoppellaro’s takes are biased and groundless. Interestingly enough, Pommier is the one directly associated with one of the sides of the conflict - being the Executive director of the "Center for Azerbaijan and Caucasus Studies" at Sapienza University, Italy.
The second action was also foreseen - after his publication Zoppellaro was targeted with messages of threats. Unfortunately, this whole process completely suits the plot of Azerbaijan’s anti-freedom of expression campaign, and it is not the first time that Zoppellaro faces threats either.

Only 5 years ago, in 2015, the researcher was enlisted in Azerbaijani “Blacklist” as a person who allegedly violated the Azerbaijani law by travelling to Nagorno Karabakh, de-facto Artsakh Republic. The real reason behind this “ban” was actually the fact that Zoppellaro denounced human rights violations in Azerbaijan and had also shown support for the recognition of the Armenian Genocide.

“I've been attacked by the Azeri press - a dozen of articles, in total - blacklisted and threatened personally on different occasions since 2015. The Azerbaijani Embassy in Rome was involved in the process, but also anonymous and personal profiles, (sadly for them), journalists, on Twitter and Facebook”,- Zoppellaro mentioned to us.

In 2016, the Azerbaijani Embassy in Italy sent an official letter to the newspaper “Il Manifesto” calling for the cancellation of the cooperation with Zoppellaro after he published series of articles on the human rights violations in Azerbaijan, as well as articles on the Karabakh conflict.

And days later, the third round of repressions against freedom activists was carried out by Azerbaijan during "Azerbaijan and the invisible repression" conference organized by Amnesty Italy in the Roman headquarters of the FNSI (National Federation of the Italian Press), attended by Zoppellaro and many other notable personas like Beppe Giulietti the President of FNSI Riccardo Noury, spokesman of Amnesty International Italy, Azerbaijani activist Dinara Yunus, the daughter of two well-known Azerbaijani dissidents Leyla and Arif Yunus, both imprisoned and then released on probation for health reasons.

The conference, indeed, was a very important opportunity to speak about Azerbaijan's repressive regime’s policy of human rights violations, the serious restrictions of freedom of speech and press. Not only did the Embassy of Azerbaijan in Italy hamper the Amnesty Italy with letters asking to suspend the meeting days before the event, but the conference was also followed by provocations that lead to quarrels,  which the special forces of Italian police “Digos” had to intervene to, sending the activist Dinara Yunus and Zoppellaro away with a taxi from the location, fearing for a possible physical attack against them, as Zoppellaro recalls.

"I don't know what is the aim of these attacks, but I know I'm not a victim. I've seen what civilians and soldiers have suffered after the 4 days war [edt - April War of 2016], and I will never forget visiting Talish right after and interviewing the families that could survive that horror. This is just an example of the consequences of this cruel, endless war, that affected people of both sides of the border. It's time to call for peace and for a new engagement of the international diplomacy, starting from the European countries, that didn't show a great interest for it recently, despite the many casualties, and despite its political and territorial proximity to the South Caucasus",- said Zoppellaro.

Such articles and personal threats on various platforms prove that Azerbaijan is trying to obstruct the work of independent journalists and researches at the state level, trying to export the policy of freedom of speech and press applied within Azerbaijan's borders.

For years, the Azerbaijani authorities have imprisoned journalists, human rights defenders, political opposition members, suing them in most cases on bogus criminal charges. International organizations should pay more attention to the violations of basic human rights and freedoms by the Azerbaijani authorities as Azerbaijan's xenophobic policy applies not only to Armenians living in Armenia, Artsakh and in the Diaspora, but also to non - Armenians, foreign activists and journalists who raise awareness on these issues.