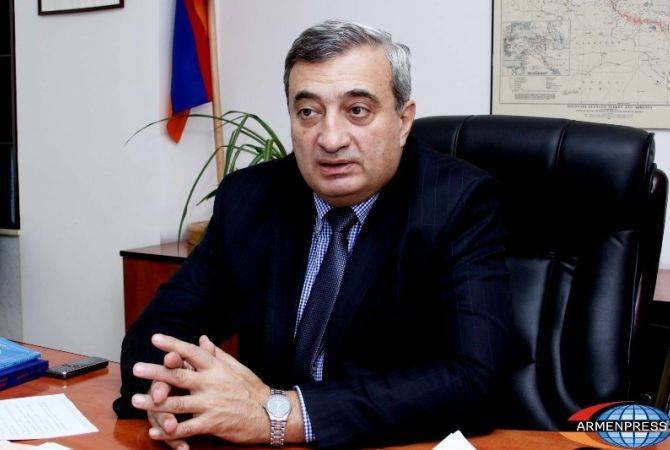 
YEREVAN, AUGUST 10, ARMENPRESS. Two years after the end of WWI, the victorious Allied Powers – including Armenia – imposed the Treaty of Sevres on the Ottoman Empire.

The treaty was signed on August 10, 1920 and abolished the Ottoman Empire and, among other obligations, provided for an independent Armenia with a 160,000 square kilometer territory.

Today, on August 10, 2020 – the 100th anniversary of the treaty, the Armenian National Academy of Sciences History Institute Director Ashot Melkonyan says the treaty is still in force and is subject to fulfillment.

“On behalf of Armenia, the treaty was signed by the head of delegation of the Republic of Armenia Avetis Aharonyan with a golden pen especially ordered for this occasion,” Melkonyan said.

“It is important that the victorious countries in person of the Allied Powers were recording the Armenian people’s right towards their historic homeland, the homeland where several years earlier the genocide and [forced deportations] had taken place, and the Republic of Armenia, as a members of the Allied Powers, was to become one of the large and powerful states comprising a 160,000 square kilometer territory in the region. Around two dozen countries had signed under this document, and after the colonial system’s collapse tens of new countries had emerged who became participants of the Treaty of Sevres, in turn officially stating the Armenian people’s rights for Western Armenia,” he said.

Melkonyan argues that the opinion claiming that the Treaty of Sevres wasn’t ratified by signatories, including Armenia itself, and thus makes it void – is simply not true.

He said the treaty wasn’t ratified because of the onset of the Turkish-Armenian war in late September of 1920, which resulted in Armenian defeat by the December 3 Treaty of Alexandropol.

“In this sense some historians argue that it doesn’t have legally binding force, but the problem is elsewhere. Articles 88-93 of the Treaty’s Section 6 entirely concern Armenia. According to clause 89, US President Woodrow Wilson had to define the Turkish-Armenian border, which had to include most of parts of the provinces of Trabzon, Erzurum, Bitlis and Van, meaning that Armenia had to have a maritime access. However, it wasn’t realized, because unfortunately the international situation abruptly changed in autumn of 1920, Soviet Russia was able to emerge out of civil war and in a hostile atmosphere with the Allied Powers – its former allies – it was forced to get closer with Turkey – which was struggling against the Treaty of Sevres – and the Soviet-Kemalist rapprochement took place on the basis of this general anti-Entente front,” Melkonyan said.

The rapprochement led to Russia giving consent to Turkey to attack the Republic of Armenia after the Congress of the Peoples of the East in 1920 and to Sovietize Armenia with its Turkish troops, however this also was not the reason for cancelling the Treaty of Sevres”.

“The Treaty of Sevres Article 89 was a legally binding verdict. It had to come into force without ratification. Turkey was obliged to immediately and unconditionally accept this document because a legally binding verdict doesn’t have to be ratified by this or that country. In terms of international law, from the very first day of presentation in November 22, 1920  the Treaty of Sevres remains in force up to this day, and de jure the Armenian-Turkish border isn’t defined by the current Akhuryan-Araks line, but actually the borderline including the major part of the provinces of Trabzon, Erzurum, Bitlis and Van, with Western Armenia’s 90,000 square kilometer territory and 70,000 square kilometer of Eastern Armenia – including the territory of the Republic of Armenia,” Melkonyan said.

Another fact which states the Treaty of Sevres’ active status, according to Melkonyan, is that the Allies of World War I, or the Entente Powers, are using this very same document against the Turkish government for any given interest even during present days.

“It’s no coincidence that from time to time the countries of Entente Powers are bringing this document to agenda in the event of worsening intergovernmental relations with Turkey and are reminding that the present-day de-facto Armenian-Turkish border is in legal terms not valid, while the valid border is the one defined by Woodrow Wilson’s legally binding verdict,” Ashot Melkonyan said.

Another misconception is that the treaty is becoming invalid after 100 years pass since its signing. Melkonyan says none of the signatories have announced that the treaty is null and void, thus it is still active. Moreover, the document doesn’t contain any deadlines or timeframes.