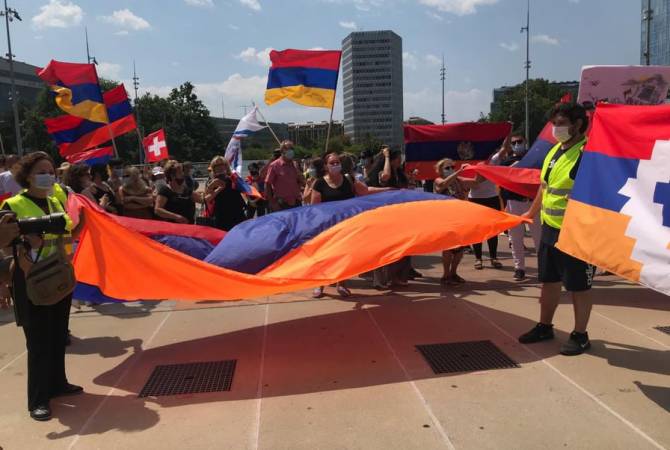 
YEREVAN, JULY 28, ARMENPRESS. A peaceful protest took place in front of the United Nations Office in Geneva against the recent military offensive unleashed by Azerbaijan against Armenia on July 28. ARMENPRESS reports the purpose of the demonstration, initiated by a number of Armenian community organizations, was to draw the attention of the Swiss public and the international community to the shelling of Armenia's civilian population and infrastructure by Azerbaijan, accompanied by anti-Armenian hatred and xenophobia, as well as Turkey's actions towards the promotion of regional tensions. The main slogans were aimed at stopping the aggression against Armenia, condemning the destructive actions of Azerbaijan and Turkey, and urging to establish a peaceful and secure environment.

On this occasion a number of Armenian community organizations in Switzerland issued a joint press release that strongly condemned the military offensive of Azerbaijan against Armenia, and provided its detailed account. The Swiss-Armenians condemned the unequivocal support of Turkey to the aggression and its irresponsible and hostile attempts to jeopardize the fragile regional stability. They emphasized that the threats of Baku to launch a missile strike at the Armenian Nuclear Power Plant is an act of state sponsored terrorism.