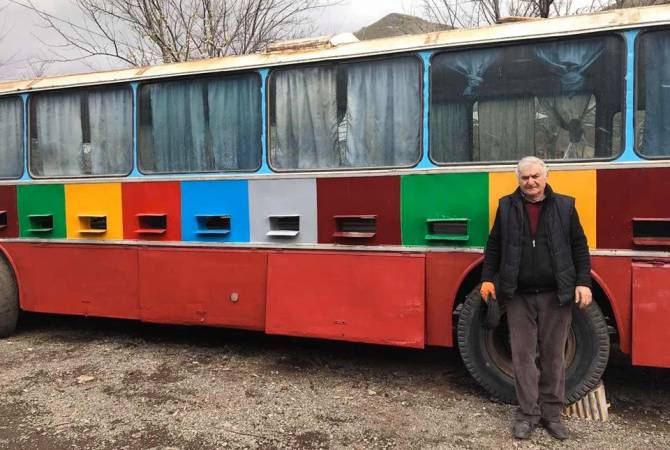 
YEREVAN, JUNE 15, ARMENPRESS. Karlen Chagharyan, 72, a resident of Armenia’s Goris town, is engaged in beekeeping for more than 30 years. He continues the work of his father who also has been engaged in beekeeping for many years. Recently the Goris town resident decided to bring something new in his work, making the process more effective. He colored his own bus and turned it into a beehive.

“In fact, this idea is for making my work easier and raising its effectiveness. After turning the first bus into a beehive I understood how much it was effective. Previously, when I was placing the beehives in fields, some times later I had to transport them to another place which required money, etc. Now these problems do not exist anymore. I take the beehives which are located in the bus to another place very easily. In order to have a good honey, transporting beehives from time to time is very important”, he told Armenpress, adding that he already has the second bus which again turned into a beehive.

Karlen Chagharyan is one of the beekeepers in Goris having the most beehives. Currently he has 120 beehives, some of which are placed in the buses. He decided to increase the number of bus-beehives as he has seen the effectiveness of this idea. He has already acquired the third bus which is at the stage of turning into a beehive.

“The advantage of having a bus-beehive is obvious. The temperature in the bus is stable, it is isolated, equipped and conditions have been created. The work with bees has become easier, neither wind, air temperature nor rain affect it. In the past I had to spend 200-300,000 AMD, engage 15-20 workers to transport the beehives, but now I take them wherever I want without making additional spending”, he said.

Chagharyan said such an idea has never been implemented in Goris. He was the first to make that invention. He says he has set a task to have a high-quality honey and is satisfied with the consumption as he has concrete clients.

“In any case, the market, the sale of honey are very important for beekeepers. Today the market is small and also has honey not in so much high-quality, and our citizens usually do not differentiate what is good honey and what not”, he said, urging to buy high-quality honey, especially when the price difference is little.