April War: Azerbaijan’s failure on the use of military force as a foreign policy tool | ARMENPRESS Armenian News Agency

April War: Azerbaijan’s failure on the use of military force as a foreign policy tool 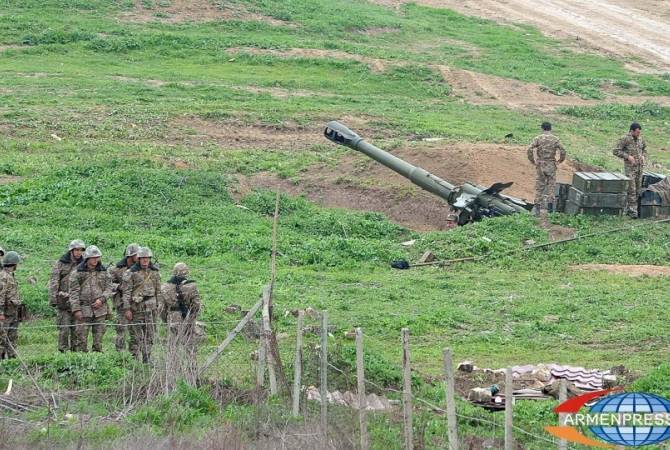 
On the night of April 2, 2016, Azerbaijan launched a large-scale attack on Artsakh in southern, southeastern and northeastern directions. The Defense forces of the Artsakh Republic successfully thwarted the offensive and launched a counteroffensive. At noon on April 5, an oral ceasefire was reached between the chiefs of the General staffs of Armenia and Azerbaijan in Moscow. In the outcome of the military operations on April 2-5, the human and material losses of the Azerbaijani army significantly exceeded the losses of the Artsakh Defense Army.

Despite the enormous amount of human force and armoured vehicles, including the ones Azerbaijan had bought during the recent years, the Military forces of Azerbaijan failed to complete the assigned tasks; achieve operational depth and refraction in the negotiation process of the Nagorno-Karabakh conflict. The Artsakh Defense Army managed to inflict a strategic defeat on Azerbaijan due to competent defensive and counter-offensive military operations.

The initiation of the April 2016 War by Azerbaijan, was the largest flare-up of anti-Armenian hatred policy, or, in other words, Armenophobia, since the beginning of the truce in 1994.

In a Security Council meeting convened on April 2, President Aliyev tried to justify the offensive initiated by Azerbaijan, announcing: “...All conflicts must be resolved on a single principle. The principle of self-determination of nations must not violate the territorial integrity of countries. This is what the Helsinki Final Act states”.

This statement is proof itself, that Azerbaijan has given huge importance to the initiation of military actions in the scope of its state strategy.

As a result of large-scale military actions on April 2-5, Azerbaijan managed to occupy a few combat positions in the Northern and Southern directions. Despite this, Azerbaijani Military forces failed to fulfill its military tasks, suffering heavy combat and human casualties. By the virtue of the counter-offensives of the Artsakh Defense Army, some of the above mentioned positions were recaptured and Artsakh was able to repel the alleged main attack of the Azerbaijani Armed forces in the central direction.

In particular, Armenian forces were able to thrust back the attack planned in the direction of Akna(Aghdam). Following this, Azerbaijan’s Minister of Defense Zakir Hasanov ordered Azerbaijan’s armed forces to be ready to launch heavy combat attacks on Stepanakert and other Armenian settlements.

The analysis of the first day of the military actions shows that Azerbaijan had adopted the tactics of a rapid breakthrough with the use of mobile groups for special purposes. In particular, the 052 separate special forces brigade of the Azerbaijani Armed Forces was involved in the Northern direction of Talysh. However, despite the successful sabotage penetration in the primary segment, the brigade then found itself in a blockade and lost more than 30 soldiers, including junior and senior officers.

The harmonization of special purpose groups and combined arms forces failed. Due to this, the tactic of providing a breakthrough with a surprise attack came to naught. Therefore, Azerbaijan put heavy artillery into action, thereby transferring the military attack to a positional battle and failing the primarily initiated military action. It’s important to note that these artillery systems, and “Smerch” in particular, completely lacked in their implementation.

These turnouts made a ceasefire desirable for Azerbaijan and after the oral ceasefire agreement of April 5 between the Chiefs of General of Staff of Azerbaijan and Armenia, the military actions were put at a halt. Azerbaijan's aggression against Artsakh was successfully prevented.

Azerbaijan did not provide accurate and final data related to its human losses, as usually hiding the real number of casualties, but it became clear by open source investigation that the Azerbaijani armed forces lost at least 93 soldiers during the military operations. To be more exact, at least 70 losses were reported in the northern direction, in Talish, and at least 22 losses in the southern direction, in Fizuli. It is also worth noting that a significant number of special force combatants were among the fatalities of the Azerbaijani Armed Forces.

“There are literally dozens of casualties each year, and as you may know, fighting flared up dramatically in early April, April 2 to April 5 – so-called 4-day war – with hundreds of casualties – an estimated 350 casualties including civilians”, stated the US State Department officials, on their special briefing on May 16, 2016. According to the same statement, Azerbaijan has had much more losses, compared to Armenia as well. This allows us to confirm our assessments related to the number of casualties of the Azerbaijani side.

The Armenian side reported 800 hectares of land losses, which the President Serzh Sargsyan also did confirm in an interview. Despite this, Azerbaijan claims to occupy a territory of more than 2000 hectares.

Hrant Mikaelyan, a researcher at the Caucasus Institute, published an article on Kavkaz-uzel.eu website where he mentions that Artsakh lost a total of 9.93 sq km or 993 hectares of land, based on an analysis of maps (according to his first assessment, Armenian side’s land-loss was 795 hectares). In any case, it should be noted that this data is not accurate, as it is based on maps and may definitely differ from the actual measurements. It’s also important to consider that Artsakh’s overall territory currently is about 11,500 sq km, and the above-mentioned 800-900 hectares or 8-9 sq km land is only 0.07 % of its total territory. Clearly, one can not consider the capture of such a relatively small territory as success especially when taking into account the fact that Azerbaijan mobilized huge amounts of forces and military equipment.

During the April War, Azerbaijan has repeatedly violated its international obligations and a number of international conventions. In particular, Azerbaijani soldiers brutally murdered 3 elderly residents of Talish village; Valeri Khalapyan, his spouse and 92-year-old Marusya Khalapyan, and maimed their corpses. Vagharshak Grigoryan, a schoolboy born in 2004, was killed in Azerbaijani shelling in front of his school located in Zoravan village (Nerkin Tchartar). 2 other children were also wounded.
Besides this, according to the 2016 report prepared by the Artsakh’s Ombudsman office, 90 % of the 28 soldiers of the Artsakh Defense Army who were caught in the control zone of Azerbaijani forces, were also brutally killed and their corpses were mutilated; many amputation cases were also reported (both alive and after death). 3 cases of decapitation were registered.

A footage of how the Azerbaijani soldiers were showing Yezidi Kyaram Sloyan’s cut off head to a group of villagers and proudly celebrating their “heroic act” was dispersed on the Internet. Some time later the official website of the President of Azerbaijan posted a picture where Ilham Aliyev was awarding the soldier who had committed that act of “heroism”.

The above-mentioned facts also clearly state that the policy of using military force adopted by Azerbaijan not only does ignore its international obligations but also encourages racism and war crimes which was clearly demonstrated during the military operations in April 2016.

April war once again confirmed that the security of the population of Artsakh can be guaranteed by its own armed forces only.