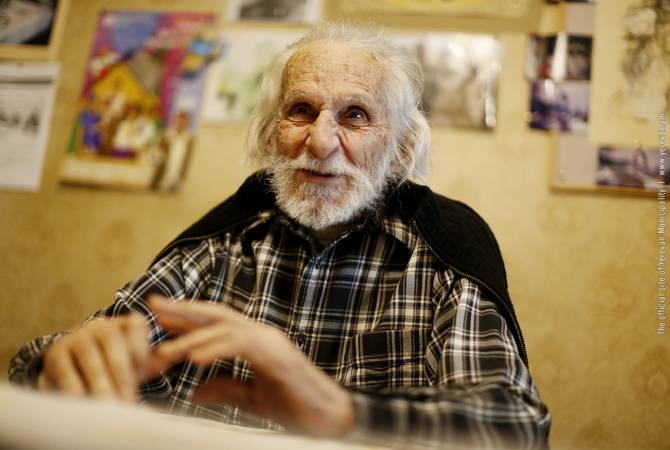 
YEREVAN, FEBRUARY 20, ARMENPRESS. Government officials are expressing condolences and sympathy over the death of Yervand Manaryan, the renowned actor and filmmaker who passed away February 20 at the age of 96.

Prime Minister Nikol Pashinyan shared on social media a 2018 photo of himself with Manaryan and wrote “May God rest your soul, dear maestro”. The photo was made in October 2018, when Pashinyan was caretaker prime minister and visited Manaryan in his apartment.

Deputy Prime Minister Tigran Avinyan also offered condolences, saying “Yervand Manaryan the artist, the scholar, the citizen will always be in our hearts and minds”.

Minister of Education, Science, Culture and Sport Arayik Harutyunyan said Manaryan was “an example of a free mind and unconstrained scholar…” “…..literally a people’s artist”.  “A luminous presence left us”, he said.

Manaryan was born in 1924 in Arak, Iran. He immigrated to Armenia in 1946 and enrolled in the Yerevan Theatrical Art Institute, graduating the filmmaking faculty in 1952. Besides acting, he was also directing and scriptwriting.

In 2003, he was awarded the title of Merited Artist.

In October 2018, PM Pashinyan awarded Manaryan the title of People’s Artist of Armenia. A year later Yerevan Mayor Hayk Marutyan awarded the artist the title of Honorary Citizen of Yerevan.