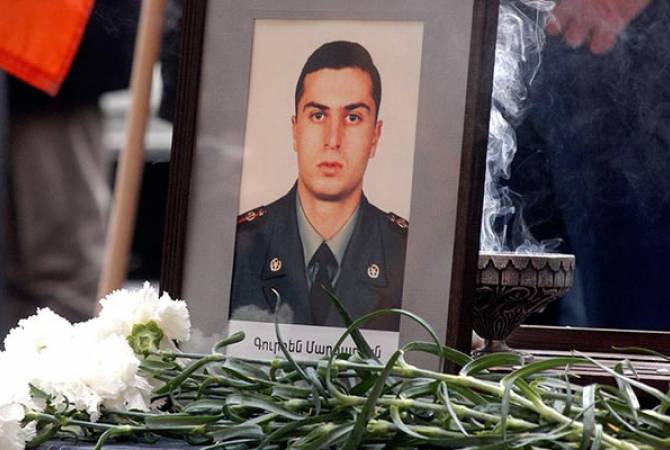 
YEREVAN, FEBRUARY 19, ARMENPRESS. The murder of Armenian officer Gurgen Margaryan in Budapest and the subsequent actions prove the racist nature of Azerbaijan. By pardoning the perpetrator of this murder Azerbaijan has ensured impunity, and giving privileges to the criminal has been conditioned by the murder based on ethnicity. All these issues are stated in the appeal submitted to the European Court of Human Rights (ECHR).

The ruling My Step faction MP of the Armenian Parliament, expert on Azerbaijani studies Tatev Hayrapetyan and attorney Siranuysh Sahakyan gave an interview to Armenpress today, the anniversary of the murder of the Armenian officer, talking about the topic.

“The tragic murder of Gurgen Margaryan and the subsequent actions clearly show what country we are dealing with. Azerbaijan’s all actions once again prove its militaristic, xenophobic and racist nature”, Hayrapetyan said. She said Armenia doesn’t miss any opportunity and raises this issue at all international platforms, and this is being done both at the leaders, parliamentary and NGO level. Recently, the Prime Minister of Armenia again touched upon this topic at a meeting in Berlin.

“The murder of Gurgen Margaryan was carried out in the center of Europe several years ago. We must continue talking not only about this tragedy, but also the other cases to show Azerbaijan’s real character. Both the election frauds and Azerbaijan’s militaristic rhetoric and hostilities speak about the fact that there will be no return to the past”, Tatev Hayrapetyan said, adding that like in the past, now as well Azerbaijan is distinguished with its open anti-Armenian policy. “If one day peace is achieved, it can happen only in case of change of this thinking, but we do not see this at this stage yet”, the MP said, adding that Armenophobia has become a state policy in Azerbaijan.

Siranusyh Sahakyan introduced the details of Gurgen Margaryan’s case in the ECHR, stating that it is at the final stage. According to her, the ECHR is expected to release the verdict in March. The ECHR case is against Hungary and Azerbaijan.

“For Azerbaijan’s part we asked the Court to record that a violation of right to life has taken place. The appeal says that Azerbaijan has ensured impunity by pardoning the criminal. We have also put inquiries that giving the pardon and privileges to the criminal has been conditioned by the murder based on ethnicity. This is a very important point because as a result of it we should reach the recording of anti-Armenian discrimination by the international court, showing that Azerbaijan is responsible for that as a state”, she said, adding that they will be consistent in the implementation of the verdict of the Hungarian court, meaning that murderer Ramil Safarov should be sent back to Hungary to serve his sentence.

On January 11, 2004, Gurgen Margaryan left for Budapest, Hungary, to participate in a three-month English language course which was part of NATO's Partnership for Peace program. On February 19 he was axed, while asleep, by his fellow Azerbaijani participant, Lieutenant Ramil Safarov. The murder took place at 5 am, while the victim was asleep.

Safarov, who was sentenced to life imprisonment, was transferred back to his home country on August 31, 2012 under an extradition agreement. Although Azerbaijan formally pledged that the life sentence handed down to him in Hungary would be directly continued when he was returned to his homeland, the Azerbaijani president granted him a pardon and formally recognized him as a “national hero” upon his arrival.