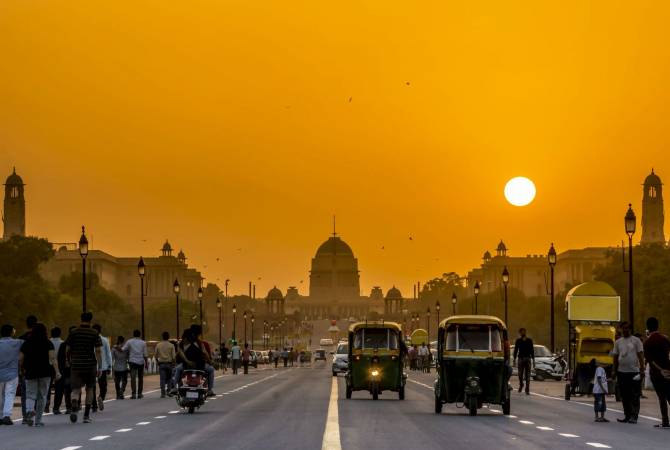 
YEREVAN, FEBRUARY 12, ARMENPRESS. India has amended its Citizenship Act of 1955 in December 2019 to allow persons belonging to Hindu, Sikh, Jain, Buddhist and Christian faiths who have illegally migrated into India over the years from three neighbouring Islamic countries, namely, Pakistan, Bangladesh and Afghanistan, to acquire Indian citizenship on a relatively fast track basis. The exclusion of Muslims from the amendment has been criticised by India’s political opposition, sections of the civil society, leftist student groups and others for being unconstitutional, diluting India’s secularism and eroding India’s democracy.

The BJP won a huge majority in India’s general election in May last year, consolidating further its impressive victory in the 2014 elections. Amending the Citizenship Act of 1955 has been on the party’s agenda all along. In its previous tenure the BJP government had moved the amendment but it could not be passed because the party did not have a majority in the Upper House of India’s parliament, and so the legislation had to be shelved. This time also the party lacked a majority in the Upper House but was able to get the legislation through with the support of a section of the opposition. In other words, the Citizenship Amendment Act (CAA) was passed after an intensive debate in both houses of parliament when all the issues raised by the opposition, including the perceived anti-secular nature of the amendment, were answered by the government. The legislation was passed through an open, transparent and fully democratic process. The constitutionality of the legislation has, nonetheless, been questioned by opponents and the matter will be adjudicated by the Supreme Court of India. This is in consonance with the robust functioning of India’s democracy.

The CAA was necessitated because Hindu, Sikh, Buddhist, Jain and Christian minorities who have entered India over decades and settled down in the country could not acquire Indian citizenship under the pre-amended citizenship law. They were, thus, deprived of many benefits of Indian citizenship and had to live precarious lives. These minorities entered India for many reasons- persecution, discrimination, physical insecurity, threat of forcible conversion, and so on. In 1947 minorities in Pakistan, mostly Hindus and Sikhs, constituted about 23% of the population; today they constitute about 5%, with Hindus at about 1.65%. In 1971, at the time of Bangladesh’s creation, Hindus constituted 19% of the population, whereas in 2016 they constituted only 8%. These are telling figures that testify to the large scale exodus of minorities from Muslim majority neighbouring countries. This should be contrasted with the number of Muslims in India in 1947 at 92 million and their estimated number today at about 200 million. Not only that, Muslims have occupied the highest positions in the country in all domains, the Indian constitution protects the rights of all minorities and Muslims, along with other minorities are given special rights in the management their religious and educational institutions.

Now, these non-Muslim minorities, primarily Hindus and Sikhs, could only migrate to India and nowhere else, given that the historical home of Hindus and Sikhs is India. No Muslim country would either accept them or give them citizenship. But then, amongst those who have entered India illegally over the decades have been Muslims from Bangladesh. They did so not because of religious persecution discrimination, physical insecurity or threat of conversion. They came for better economic opportunities, encouraged also by Bangladesh regimes of the past for political reasons. Their case is different, as they can return to their country of origin, after, of course, identification as illegal migrants. The Indian government estimates that there are about 20 million illegal Bangladeshi migrants in India, though the exact number can only be determined after a citizenship roll is established.

India is probably unique amongst major powers in not having a system that legally identifies its citizens. It does not have a citizenship register; the system of national identity cards does not exist. This is an anomaly for a country that has a long open border (1758 kilometres) with one of its neighbours (Nepal), a longer porous border (4096 kilometres) with another (Bangladesh), and several thousand kilometres of contested or un-demarcated borders with two others (China and Pakistan- 4056 kilometres and 3323 kilometres respectively).

The government has repeatedly clarified that the CAA is to grant citizenship on a one-time basis to a particular group of persons with no alternative options and not to take away the citizenship of any one, much less an Indian Muslim. The CAA has a cut-off date of December 31, 2014, after which no illegal immigrant, whether Hindu, Sikh, Buddhist, Jain, Christian or Muslim would be eligible for citizenship under the amendment. In this larger sense, the CAA is by no means anti-Muslim.

The opposition elements in India believe that they have got an issue to put the Prime Minister Modi-led BJP government on the defensive, and hence the resolutions passed by opposition ruled Indian states not to implement the CAA. Unable to have their way in parliament and looking for an issue around which those opposed to the BJP government can coalesce, the opposition is over-dramatising issues and indulging in unrestrained fear-mongering.

Outside observers need to better understand the dynamics of internal politics in a raucous democracy like India. However, because the issues of refugees, migration, targeting of minorities anywhere, rise of nationalism have international resonance, western liberal circles, political and in the media, which have anti-Indian lobbies embedded in them traditionally, have picked up the CAA and NRC controversy in India and have begun a malicious campaign against the government, without trying to understand the issues dispassionately. In the process they are showing disrespect for Indian democracy. Worse, they are openly interfering in India’s domestic politics on the side of the opposition. These circles should learn to respect the sovereignty of other countries and curb their tendency to pronounce on internal developments in them. They condemn interference in their internal politics by others and even punish them for this, but openly interfere in the internal politics of other countries. They should not believe that they have a responsibility to shape them or that they have a better idea of how other countries should be governed, more than their elected leaders. They forget that Prime Minister Modi was elected as India’s leader through the largest ever democratic exercise in human history, with more than 550 million voting in an electorate of 830 million.