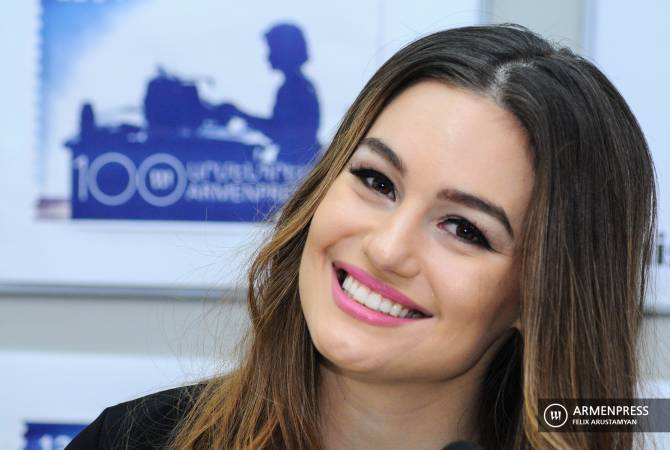 
YEREVAN, FEBRUARY 12, ARMENPRESS. Greek-Armenian singer Athena Manoukian, who is taking part in the “Depi Evratesil” (To Eurovision) Armenian national selection program, is preparing for the contest with a great responsibility.

The singer told a press conference in Armenpress that she has a great desire to represent Armenia at the Eurovision Song Contest 2020.

“Consistent work has been done, I prepared for the Depi Evratesil very seriously. The main message of my Chains on You song is that we all have some diamonds which is our talent, and sometimes some people want to take it from us, but we should remember that the only way for diamonds to shine is only on us. In the end all of us we have a worth and talent, in the end your diamond is going to shine only on you”, she said.

Talking about the contestants she said all of them are really talented and all the songs have something unique, have a unique sound. Along with Athena, TOKIONINE, ERNA, Miriam Baghdasaryan, Agop, Karina EVN, Vladimir Arzumanyan, Hayk Music, Arthur Aleq, Gabriel Jeeg, EVA Rida, Sergey and Nikolay Arutyunov are participating in the Depi Evratesil song context. On February 15 it will be revealed who is going to represent Armenia at the Eurovision 2020.

Asked what to expect during the performance on February 15, she said it is going to be a surprise.

As for her future plans, Athena said she is currently working on her new album that will be released soon. It has 5 songs, mainly dance songs. She also has plans with Armenia, is going to visit many sites to discover the country’s beauty. Athena is also planning to visit the Armenian Genocide Museum-Institute.  As for her creative path, she says she plans to include Armenian songs in her list, as well as is ready to cooperate with the local singers in case of proposals.