Germany one of Armenia’s key partners: 2019 trade turnover grew by 4.2% 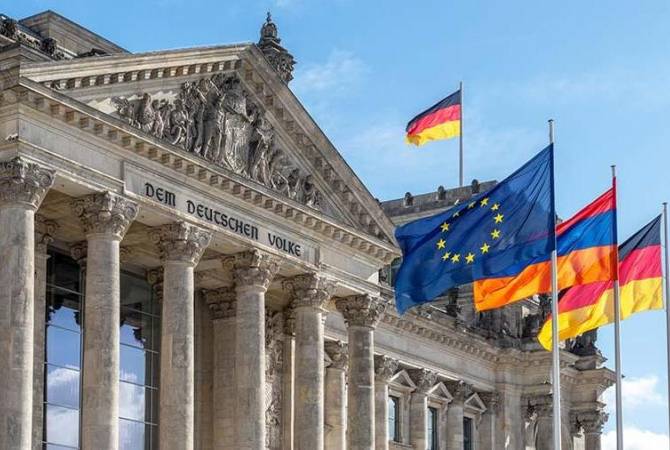 
YEREVAN, FEBRUARY 12, ARMENPRESS. German Chancellor Angela Merkel will receive Prime Minister of Armenia Nikol Pashinyan in Berlin on February 13. At the meeting the sides will discuss the bilateral relations, economic policy, as well as issues relating to the foreign policy and security. The Armenian PM will also take part in the Munich Security Conference which will take place on February 14-16.

ARMENPRESS is presenting a brief information and statistics on the Armenia-Germany political and economic relations.

Armenia and Germany established diplomatic relations in January 1992. Since the establishment of diplomatic ties Armenia has conducted over two dozen official visits to the Federal Republic of Germany at the president, prime minister and foreign minister level. Starting from 1995 there have been official visits from Germany to Armenia at the level of the Bundestag president, the deputy PM and the federal foreign minister. Since Armenia’s independence the German Chancellor paid the first visit to Armenia in 2018 after a power change in Armenia.

In July 2018, on the sidelines of the NATO summit, Armenian PM Nikol Pashinyan had informal meetings with the leaders of a number of countries, including Chancellor Angela Merkel.

The next meeting came shortly, and this time within the frames of a historic visit. German Chancellor Angela Merkel arrived in Armenia on an official visit on August 24. She was welcomed by PM Pashinyan at the Zvartnots international airport. After the welcoming ceremony Chancellor Merkel visited the Tsitsernakaberd Memorial to pay tribute to the memory of the Armenian Genocide victims. Thereafter, Pashinyan and Merkel held high-level Armenian-German talks in Yerevan where they discussed broad range of issues relating to the bilateral relations. In particular, they discussed the ongoing programs in the economy’s different branches, as well as the prospects of new joint initiatives.

“This visit is taking place after great changes in Armenia: the more unexpected it was for us, the more positive it was for your country. We are interested in further developing our relations with Armenia. We know that this is a complex region and we are ready to help you being your partner in solving the problems. We are ready to boost and develop the bilateral economic ties. We are full of hope that we will be able to record new results on this path”, Chancellor Merkel said in Yerevan.

The Armenian PM and the German Chancellor also discussed the Nagorno Karabakh conflict and highlighted the settlement of the conflict through peaceful negotiations under the OSCE Minsk Group Co-Chairmanship. Pashinyan said Armenia highly appreciates Germany’s balanced position on the NK conflict and support to the OSCE Minsk Group Co-chairmanship format. Touching upon the international recognition and condemnation of the Armenian Genocide, Pashinyan highly valued the adoption of the Armenian Genocide recognition resolution by the Bundestag in 2016.

The next meeting of the two leaders again was held shortly. It took place months later, on February 1, 2019 in Berlin. Pashinyan and Merkel expressed confidence that this meeting would give a new impetus to the Armenian-German friendly partnership. Merkel said Germany is interested in developing the ties with Armenia and is ready to discuss the prospects of expanding the bilateral relations. Their discussion focused on the process of joint projects in the fields of IT, environment, as well as the possibilities for new initiatives. An agreement was reached to continue the active dialogue in the implementation of various economic programs.

Recognition of the Armenian Genocide

During her visit to Armenia Chancellor Merkel visited the Tsitsernakaberd Memorial, laid flowers for the memory of the innocent victims. She also planted a fir tree at the Memorial Park.