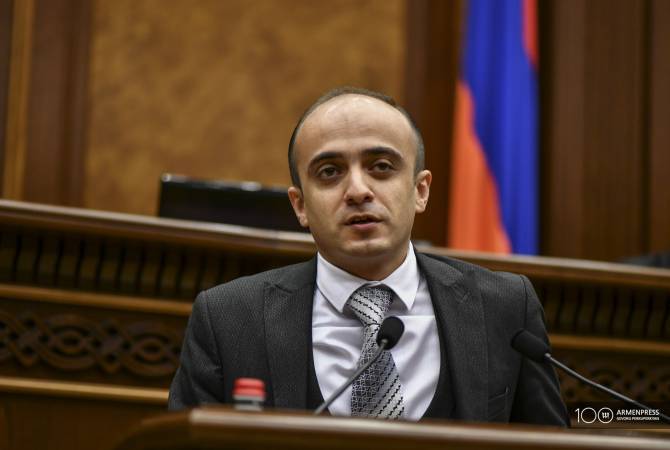 
YEREVAN, FEBRUARY 6, ARMENPRESS. Lawmaker Taron Simonyan from the opposition Bright Armenia (LHK) party argues that the parliament cannot call for a referendum around the ruling bloc’s bill regarding the high court without passing it through the first reading.

Earlier the ruling bloc, the My Step faction, itself said they will not pass their own bill in order for it to go for a vote in a referendum.

He did however note that the goal is understandable, but he asked whether the measures and methods used aren’t superficial. “In my deepest belief they are superficial. As a result of this you are ignoring many legal clauses, violating them, and in the future this entire process will have to bear these violations,” he said.

The parliament majority, the My Step bloc, will not pass its own bill on replacing the high court judges at first reading in a technical maneuver to propose to call a referendum on the matter, lawmaker Vahagn Hovakimyan from the ruling party said in parliament earlier today.

“The My Step faction will not adopt this bill on first reading and by virtue of the powers vested in parliament under paragraph 3 of Article 202 of the Constitution it will recommend putting up for vote the decision on presenting this bill for referendum. This is the application of direct democracy, this is the conviction and belief of our political force. We have faith in our people, and we have to listen to our people,” he said.

The MP said that during this period of time the parliament and the Cabinet have done their best to resolve the crisis around the Constitutional Court.

He recalled the parliament’s earlier motion that was sent to the Constitutional Court requesting to terminate the powers of chief justice Hrayr Tovmasyan, which however was denied. He also recalled the voluntary early retirement plan for justices, which was approved by the Venice Commission.

The parliamentary majority’s bill on making constitutional amendments seeks to enable replacing the Constitutional Court justices who were appointed under the previous constitution.