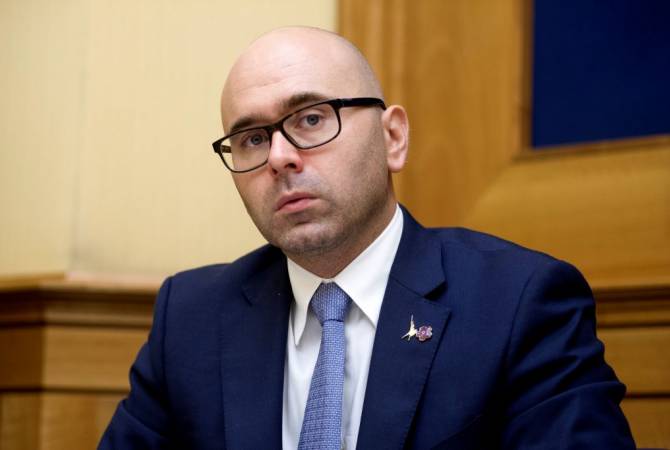 
YEREVAN, JANUARY 23, ARMENPRESS. Giulio Centemero, Member of Italian Chamber of Deputies (lower house of parliament) delivered remarks on the occasion of the 30th anniversary of the Armenian massacres in Baku.

“Just 30 years ago, on January 13-19, 1990, a massacre and deportation of Armenians were carried out in Baku based on ethnic identity. The massacres were organized by the Azerbaijani Popular Front party and were sponsored by the local authorities.

Although after the 1988 events in Sumgait, most of the Armenians living in that post-Soviet republic decided to leave their homes, nearly 35-40.000 Armenians were still living there in early 1990, much less than the 300.000 Armenian population in late 80s.

It was impossible to count the exact number of victims of the massacres because the local authorities were attempting to hide the facts. According to some international human rights organizations, more than 450.000 people have been killed. Thousands lost their whole property, according to some eyewitness reports numerous Jews, Russians and representatives of other nations were killed only because of looking like Armenians. Those who survived the massacres, settled in different countries of the world as migrants by joining the Diaspora.

Within the course of history massacres of Armenians in Baku were carried out at least three times – in 1905, 1918 and 1990. The European Parliament condemned the massacres committed against Armenians in its resolutions adopted in 1988, 1990 and 1991. Frelick Bill, chair of US Committee for Refugees, talked about the massacres and their consequences in 2002. On July 27, 1990, an open letter has been published in The New York Times addressed to the international community. The latter was signed by 133 prominent scientists and human right advocates of Europe, Canada and the USA which were voicing their complaints on the killings and massacres of Armenians in Baku.

The aforementioned crimes, as well as all the remaining crimes of the history should be remembered  and should not be concealed through propaganda so that the humanity will remember them and such events will not repeat again”.